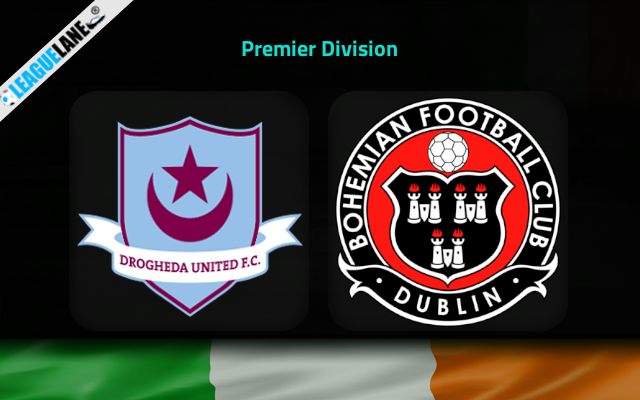 Drogheda had an inconsistent disappointing start to this season. They have been recording winless displays in a frequent rate. As a result, they occupies the 8th spot of the table, just above the relegation area on the table. Their disappointing side is dreadful too.

Drogheda recorded a 1-0 win against Dundalk at home in their most recent league fixture. They were on the back of a four game winless streak before recording the above win in the league. Therefore, they will be hoping to make that win count with the aid of home advantage.

Meanwhile, Bohemians have been recording inconsistent displays since the beginning of this season. Their imbalance resulted in their positioning. They sits 6th on the table with 29 points in hand. They have an average offensive and defensive lineup.

Bohemians have recorded a 1-3 win on road against UC Dublin in their most recent league fixture. It was their third unbeaten recording in the past five league outings. Their hopes to make this unbeaten recordings in a consistent thread would allow them to enter their next with enough of spirits.

The current unbeaten streak of Drogheda at home might be fueling them to seal more of those here. They are having a streak of four unbeaten games here. However, their best display of those were against the current bottom occupier Finn Harps.

On the other side, Bohemians have ended up their winless streak in the past on road game recording a motivating 1-3 win against UC Dublin. Adding that up their strong head to head form against Drogheda, we back them to seal a win from this fixture despite of the current unbeaten run of Drogheda.