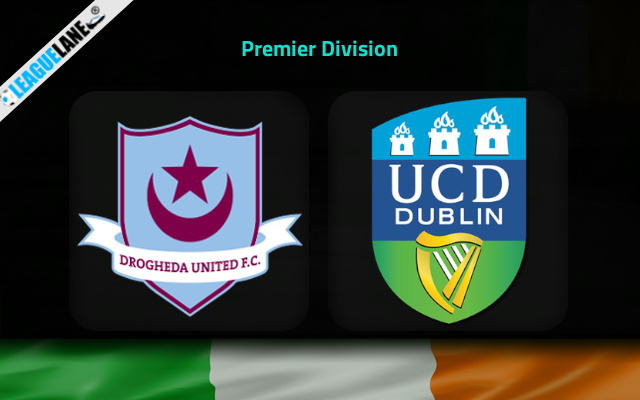 Drogheda United managed to achieve a 7th place finish last season, the team was in an apparent struggle towards the end of the season and have not been able to shake it off in the starting two fixtures this season.

In their previous league fixture, they failed to gain any points as they suffered a 3-1 loss against Shamrock Rovers away from home. This marked their second win on the bounce in the league.

Having yet to add to their points tally this season, the club now sits rock bottom of the league standings and are separated from their opponents by one position and a couple of points.

UCD has made it to the top flight of Irish football after a two year hiatus after they beat Waterford in the playoffs following a 3rd place finish in the League of Ireland First Division last season.

As expected, life back in the top flight for the club has not gotten off to the smoothest of starts as they are yet to register a win in their opening two games, managing a couple of draws.

The most recent of which came against another newly promoted club Shelbourne in a scoreless affair. With two points to their tally, they are now 8th in the league.

In terms of sheer quality, the hosts are a better side; however, the club will head into the fixture off the back of a five match losing streak in league fixtures. Whereas their opponents have managed to hold their own in the opening two fixtures and I don’t see them suffering a huge loss this Friday.

None of the last five league matches at this venue has witnessed a score line of more than two goals. UCD meanwhile have neither scored nor conceded this season and so do not expect a high scoring game.