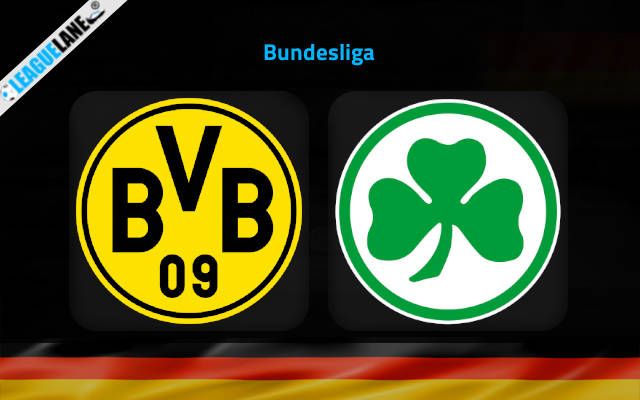 This will be one of the most one-sided games you’ll see in the entire season. The hosts, who have much more quality in their ranks, will be highly motivated to pick up a commanding victory after taking only one point from the last two rounds.

Borussia Dortmund dominated this matchup over the course of history.

Borussia Dortmund won each of the last four clashes against Greuther Furth with a 12-3 goal difference in the process.

These two teams last locked horns in the opening round of the DFB Pokal in the 2018/19 season when Borussia Dortmund advanced after extra-time (a 1-2 win on the road).

Borussia Dortmund significantly halted their push for the Bundesliga title by claiming just one point in the last two rounds.

They fell 2-3 to Bayern Munich in Der Klassiker eleven days ago and failed to rebound from it last weekend, playing only a disappointing 1-1 draw away at Bochum.

Marco Rose’s men even struggled to get that single point from the clash against Bochum as they only managed to find a late 85th-minute equalizer through Julian Brandt on the occasion.

Dortmund were a much better earn on the pitch throughout the whole course of the game and were unlucky not to win it, though.

Rose’s troops now have a nice chance to return to winning ways on Wednesday evening when they play host to the rock-bottomed Greuther Furth.

The visitors will travel to Signal-Iduna-Park with an improved confidence, though. They snatched their inaugural victory of the season on Sunday when they dispatched Union Berlin 1-0 on the home patch.

The team led by Stefan Leitl were rather lucky to pick up a three-pointer at the weekend as they were dominated by Union Berlin throughout most of the game.