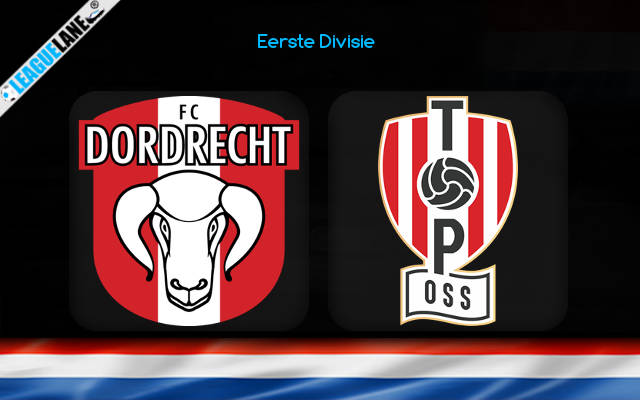 Dordrecht is unable to secure a win since the last 2 games and they sadly resides third from the bottom. They won only once from the last 6 games and has the second highest drawn figures in the league.

Oss marked their 14th loss previously in the league and has lost thrice from the last 5 games played.

Hoping to turn the tables this Monday, TOP will take a road trip to Riwal Hoogwerkers Stadium in Dordrecht for the 27th Round of Eerste Divisie.

The hosts are at the 18th spot on the standing with 26 points from 29 games. They won 6 times in the league while drawing on 8 and losing on 15 other occasions. They scored 43 in total while conceding a sum of 66 which is the worst in Eerste Divisie this season.

FC Dordrecht go into this fixture coming off the back of a thrilling 3-3 drawn match against Jong Ajax. They have seen their defense breached in all of their last 6 matches, in addition to scoring on 5 of those games.

On the contrary, Oss resides at the 12th position on the table with 31 points. Of the 29 matches played, they won on 8 games while drawing on 7 and losing on 14 other occasions.

The visitors lost the previous game against Roda by 1-2 after coming off a stalemate. They have been scored against on all of their last 6 games, conceding 11 goals in all.

Oss remain undefeated by FC Dordrecht in away games against them for the last 3 league fixtures but they haven’t won away from home since the last 2 league matches. Meanwhile the hosts are unbeaten in their previous 5 home league matches. We therefore, predict a double chance for Dordrecht.