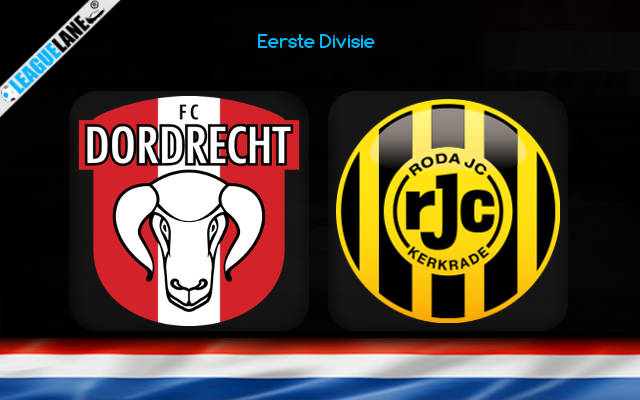 Roda JC are massive favorites going into this tie. They had as many as 21 shots in the 1-1 draw to Maastricht on Monday evening. They are now up against by far the weakest team in the division and we can hardly imagine any other scenario but a comprehensive victory for the visitors here.

Roda will be hoping to return to winning ways after four successive winless affairs as they travel to Riwal Hoogwerkers Stadion to battle the rock-bottomed Dordrecht on Friday evening in Gameweek No 18.

Dordrecht finished the previous term of the Eerste Divisie at the very foot of the standings and they are the last-placed team after 17 games of the new campaign as well.

The team obviously lacks quality to stay competitive at this level and they are underdogs against pretty much every opponent in this division.

Dordrecht boast by far the worst defensive record with 41 goals conceded in 17 games. They will enter this match off the back of a catastrophic 5-1 defeat at ADO Den Haag in the previous round.

Michele Santoni’s men allowed as many as 11 shots on target on the occasion. They lost three games on the bounce in the league, shipping at least four goals in each of these defeats.

This is why we see this match as an ideal opportunity for Roda JC to snap a four-game winless thread and return to winning ways in some style with a potentially convincing victory in Dordrecht.

Tips for Dordrecht vs Roda JC