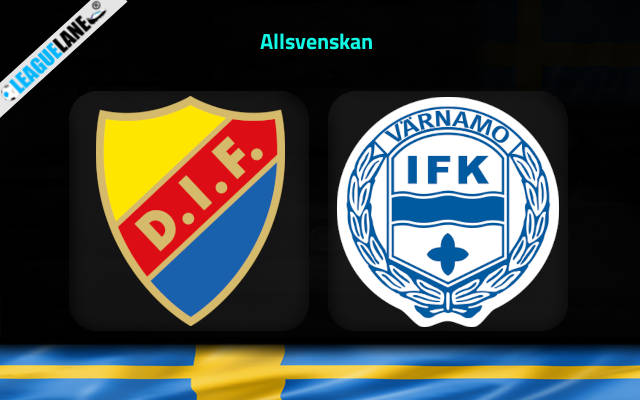 Round 14 of Allsvenskan is set for this weekend as the promotion seeking Djurgarden play host to Varnamo where both these sides differ by 14 points and are separated by 11 places. These two teams will be seen clashing at Tele2 Arena, this Saturday.

Djurgarden is at the 2nd spot on the standing with 27 points from 14 games. They won 8 times in the league while having drawn and lost 3 times each. Within the promotion-zone of Europa Conference League, they hope to overtake Hacken for the top spot, as they are only a point-lead to them.

The home side come into this on the back of a comfortable 2-0 win against bottom-most residing Helsingborg, last weekend. A common theme in more recent Djurgarden games is the high number of scores with a nil in them. From the previous 6 matches before this one, it has happened in 5 of them.

On the other side, Varnamo resides at the 13th position on the table with 13 points. Of the 13 matches played, they won thrice while having drawn 4 times but have lost on 6 other occasions. The visitors has not able to net in 5 games this season and that accounts to 38% of the games where they have not been able to find crucial goals.

Last time out, Varnamo drew 1-1 in the Allsvenskan match with Sundsvall. They have been scored against in 5 of their last 6 matches, letting opponents get 7 goals overall.

These two sides have never crossed paths before and this will be their first ever encounter.

These two sides meet for the very first time this weekend since this is Varnamo’s first ever season in the Swedish top-flight. Going into this contest, Djurgarden have not been beaten in their last 7 league matches at home. The hosts have kept clean sheets in 3 of their last 4 league games and look really strong in the defensive side.

Meanwhile, Varnamo have failed to score in 3 of their last 4 fixtures and have won just one away game form the 7 matches played on road in Allsvenskan. The visitors have even seen conceding over 2.5 goals in each of their last 3 away trips.

We therefore feel that a home win is likely to happen this weekend.