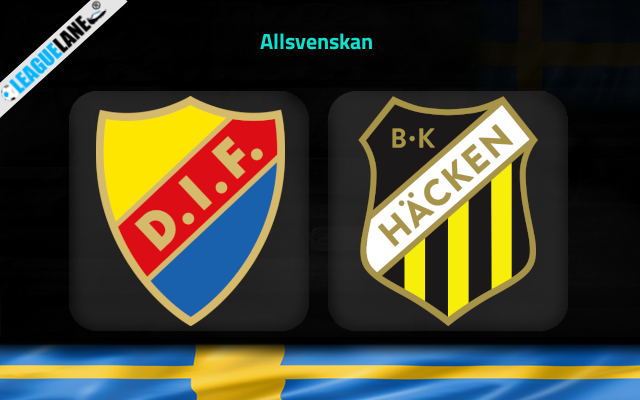 Djurgarden have an opportunity to jump above Malmo at the top of the standings with a victory in the 13th round of Allsvenskan against Hacken.

Djurgarden have been flying high after the short summer break. They won three and drew one of four Allsvenskan outings in July. The run, paired with Malmo’s unexpected slip-ups helped them cut the gap behind the defending champions down to just two points at the top of the standings.

The hosts Djurgarden have a game in hand, meaning a victory here against Hacken would see them take over Malmo.

The rock-solid defense was recipe for success in Djurgarden’s case. They own by far the best defensive record in the entire division with just 7 goals conceded in 12 league outings.

Interestingly, they will come across the team with the best defensive record in the previous term of Allsvenskan this Sunday.

However, Hacken’s back line has not quite been at the same level in this campaign since Per-Mathias Hogmo’s men shipped 16 goals so far in the season.

Their defensive weaknesses were massively exploited by Scottish Premiership side Aberdeen in the first leg of their UEFA Europa Conference League tie when the Scots bagged five goals.

Hacken played the return fixture of that tie on Thursday evening (less than three days ago) and we feel the fatigue may play a significant factor here too.

Although Hacken have also stepped up big time after the summer break (they won three and drew one of four league games as well), we can hardly see them getting a result against highly-motivated Djurgarden who have been impeccable so far in the season at Tele21 Arena.

Djurgarden have a fantastic record of five wins and one draw in six home matches this season and a scary goal difference of 14-2 in the process. We thus can’t back anything else but the home win to nil here.