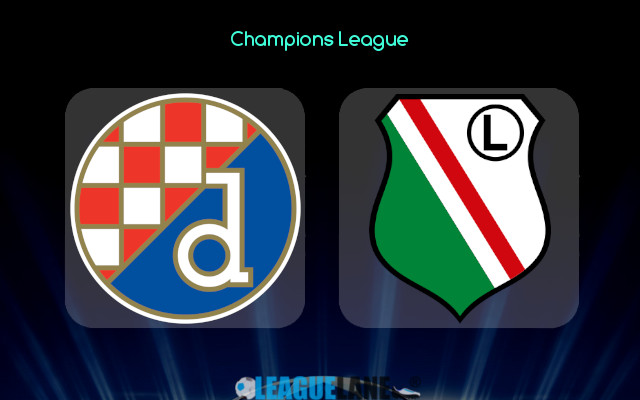 Dinamo Zagreb and Legia Warsaw will face their biggest challenge yet in the UEFA Champions League Qualifications as they come across each other in the battle for a place in the playoffs round.

Dinamo Zagreb won four out of four in the UEFA Champions League Qualifications so far this summer.

They eased past Valur without playing their main stars as the players who featured EURO 2020 were still on vacation back then.

The stars returned for the second qualifying round against Cypriot champions Omonia. The outcome was identical as the Croatians advanced without conceding a goal in the process (3-0 on aggregate).

The head coach Damir Krznar would love to see another clean sheet from his men here against the Polish champions, but we wouldn’t be too optimistic in his shoes since the team conceded three goals in the weekend’s draw to Rijeka.

Dinamo have already slipped up twice in three opening rounds of the new 1. HNL campaign, falling 0-2 at home to Slaven Koprivnica in mid-July.

On the bright side for the hosts, their rivals Legia have not done much better at the beginning of their new title defense quest in Polish Ekstraklasa.

The team led by the former Polish U21 national team head coach Czeslaw Michniewicz suffered a tough 3-1 defeat at Radomiak Radom in the second round on Saturday.

They also lost the Polish Supercup to the likes of Rakow Czestochowa three weeks ago (n penalties, 1-1 in the regular time).

This will be the first head to head encounter between the two teams.

Dinamo Zagreb have been much more consistent in terms of successful European runs in the recent years. The Croatian champions made it all the way to the UEFA Europa League quarterfinal last season, eliminating the likes of Tottenham Hotspur in the last 16 round.

They also topped their respective group, conceding the first goal in the sixth round match back then. Legia, on the other side, suffered an early elimination in the UEFA Champions League Qualifications and the playoffs elimination to Azerbaijani Qarabag in the UEFA Europa League last time out. We’ll go with the home win at the 1.65 odds as the main betting option here.