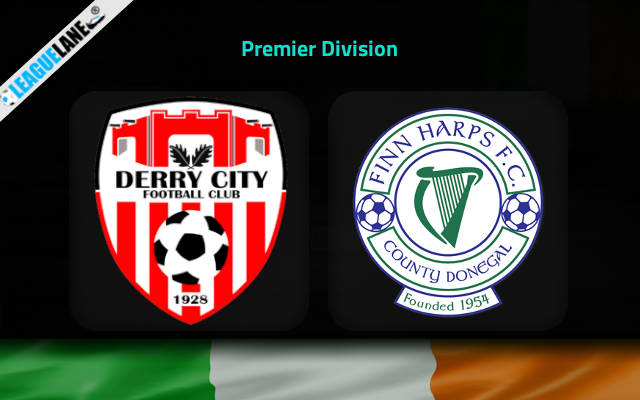 The battle between second placed Derry City and second last placed Finn Harps is scheduled this Friday as the Candystripes hosts the Harps at Brandywell Stadium.

Derry City are at the 2nd spot on the standing with 32 points from 18 games. They won 9 times in the league while drew on 5 and lost on 4 other occasions. Even though they have only a 7-point gap with the table toppers Shamrock Rovers, the Candystripes are without a win since the last 5 league fixtures.

The home side will be wanting a better result here after the 1-2 league loss in their previous game against Sligo Rovers. That was their third defeat in a row and Ruaidhrí Higgins’s men have managed to score only 7 times in their last 6 outings.

On the other hand, Finn Harps reside at the 9th position on the table with 10 points. Of the 17 matches played, they won 2 times in the league while drew on 4 and lost on 11 other occasions. There have been 4 straight losses in Premier Division for the Harps and that ultimately dragged them into the relegation zone.

Finn Harps suffered their fourth defeat in a row previously at the hands of Dundalk by 0-1 margin. They had fired blanks in 7 games this season and that is 44% of games where they have not been able to find the back of the net.

Derry City have won only 1 of their last 6 Premier Division matches and come here on the back of 3 consecutive league losses. But they remain undefeated in their last 3 league meetings with Finn Harps.

Meanwhile, Finn Harps have suffered 3 away defeats by 2 or more goals in a row in their latest league matches. They also com here on the back of 4 straight league losses and now they are currently battling relegation.

By the looks of things, expect a win for the hosts and hope that they regain their momentum from this game onwards.