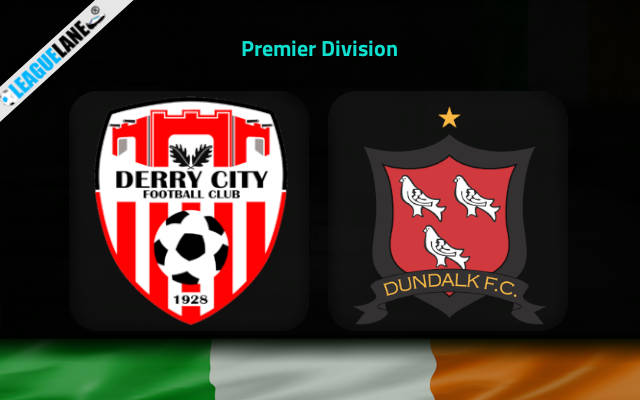 Derry City had played well in their matches since the start of this season, resulting with the team staying in the upper half of the league table. However, in the recent matches, the team seems to have shown a bit of trouble with their form. At the moment, the team has not secured a win in the last three matches. Even after the trouble with the form, the team still stands second on the table with 32 points from their matches.

Derry City played their last match against Shamrock Rovers, in which Shamrock scored one goal while Derry City could score none, ending the match in a loss for Derry City with 1-0 FT score.

Dundalk has played well in their matches this season, losing in only two matches so far into the season. From the last ten matches, the team has won in five, draw in three and lost in two. The strong form has placed the team third on the league table with 25 points from their matches. Currently, the team is unbeaten in the last four matches as well.

Dundalk played their last match against Bohemians. In the match, Dundalk scored three goals while Bohemians could score only one, ending the match in a win for Dundalk with 3-1 FT score.

Derry City has exhibited a bit of trouble with their form in the recent matches, going winless in the last three matches. However, the team can get back in form at any time and secure wins. Dundalk and Derry City have only got a two-point difference with each other as well.

Derry City has the advantage of playing in their home ground, where the team has lost only once in this season. They are unbeaten in the last three matches as well. Dundalk, on the other hand, has not had a win in their away matches this season.

Looking at the records, we can expect the match to end in a win for Derry City. Both teams can be expected to score in the match, ending the game with over 2.5 goals.