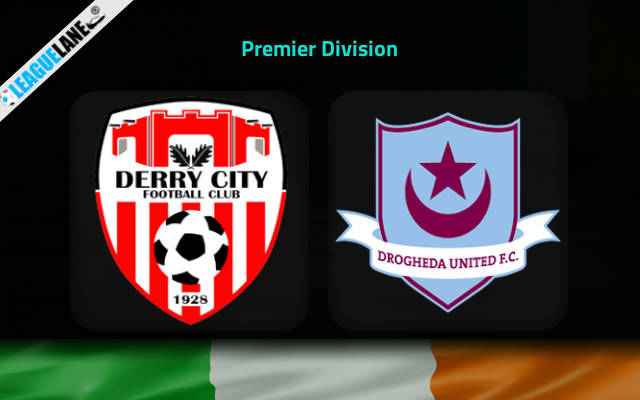 Round 20 of Premier Division is set for this Friday as Derry City play host to Drogheda where both these sides are separated by 13 points and 4 places. These two teams will be seen battling it out at Brandywell Stadium.

Derry City is at the 3rd spot on the standing with 33 points from 19 games. They won 9 times while drew on 6 and lost on 4 other occasions. The hosts are in the zone for acquiring a promotion to ECL qualifiers and need only 2 more points to takeover the second spot.

The home side go into this game after a 2-2 league stalemate over Finn Harps. They have seen their defense breached in 5 of their previous 6 games, leaking 8 goals during that time.

On the other hand, Drogheda resides at the 8th position on the table with 20 points. Of the 18 matches played, they won and drew 5 times each while having lost on 8 other occasions. The visitors are just 9 points safe from the drop zone and are currently third from the bottom.

In their previous game, Drogheda drew 1-1 in the Premier Division tie with Bohemian FC. Things have not been going that well in front of goal for them recently, with the side failing to score in 2 of their last 5 games.

Derry City have picked up 3 wins from their last 5 competitive matches against Drogheda, including a 2-0 win the last time the pair locked horns at Brandywell Stadium. Even though they are on a 4-game winless run at home, they lost only once from the last 5 home fixtures.

Meanwhile, Drogheda lost 3 of their last 4 away games conceding 8 goals in total. They also lost 4 of their last 5 visits to Brandywell Stadium while failing to net in 3 of those. Moreover the visiting side won only one away game this season.

Considering their previous h2h stats and current form, we feel that a home win is likely to occur this Friday.