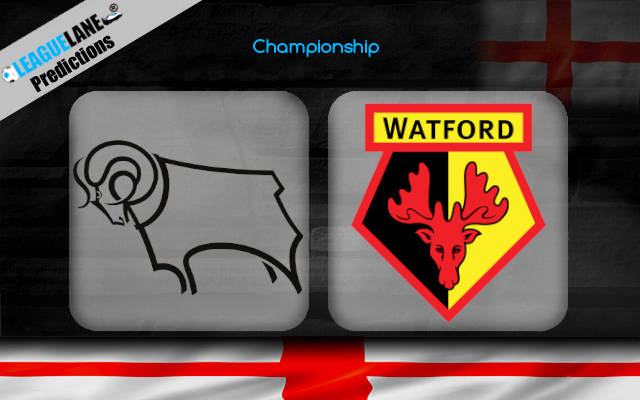 After a short break for international matches, English Championship will resume this Friday. Round Five opening match will take place at Pride Park where Derby County welcomes Watford FC.

It looked like this break came at bad time for The Rams. They finally recovered from an awful start to the new campaign and defeated one of the best teams in the league Norwich City.

Are they able to take big scalp for second time in a row and escape the lower part of the table?

All matches between these clubs in the eight years always offered a lot of action and goals. For example, the last seven h2h’s ended with both teams scoring plus Over 2.5 FT, which is very useful info for the goals market.

There were 32 encounters in the past and Derby County have the 13-9 advantage when it comes to victories. They have been specially convincing at this venue, winning 50% of all matches so far.

The average number of goals scored at Pride Park so far 3.33 per duel!

Derby County had a really rough time in the opening weeks of Championship season 2020/21. They were defeated in first three games by Reading, Luton Town and Blackburn Rovers, scoring only one goal and conceding eight!

Tables have finally turned at Carrow Road in early October, beating The Canaries 1-0 thanks to the very late goal of veteran Wayne Rooney.

Fans were expecting to see so much more from 19-years old midfielder Jason Knight, but his performance is not on high level at the moment.

Watford’s journey so far has been decent but not great, having won seven out of possible 12 points. They are definitely a tough team to beat.

Our primary suggestion is going to be Both teams to score at 1.80 odds. The second tip is designed for small stake only – the draw.