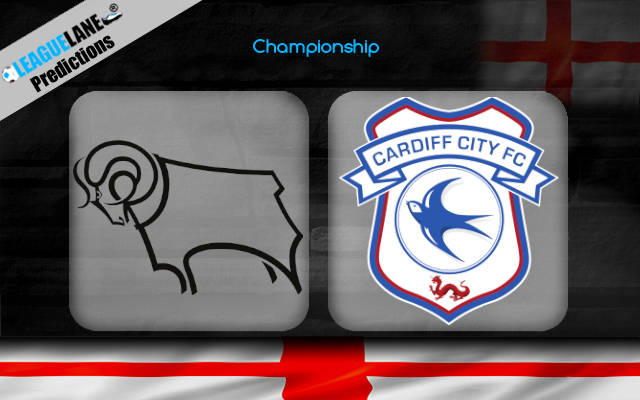 Derby is at the bottom three of the table this term as it stands, with 5 losses in their 7 league appearances so far this season. The Rams will host on the back of a 1-1 draw on the road against Nottingham Forest last time out in the campaign schedule.

Cardiff has picked up 9 points in the league this term with 2 wins, 3 draws, and 2 losses in their overall schedule. They are on a four-game unbeaten run in the campaign with just one win within it. They will visit on the back of a 1-1 draw at home with Middlesbrough in the Championship.

Derby has won only one of their past seven Championship fixtures in the schedule. They are five points behind the visitors in the league table and are on a winless streak in the campaign. So, the traveling side has a slight edge over the home team in the upcoming match.

Cardiff has lost only two of their seven appearances until now and has an unbeaten streak in their schedule for the past four league clashes. Besides, the Bluebirds have lost none of their three outings in the campaign so far this term.

In the meantime, the Rams have lost all three home matches in the league until now. Having scored no goals in those trio defeats, the home team poses no threat for the away side. Hence, the double chance favoring Cardiff will probably be the best bet for the punters in the clash.

Along with that, the tip for Cardiff City to win with a +1 handicap will also come in handy for the punters to yield decent returns in the encounter.