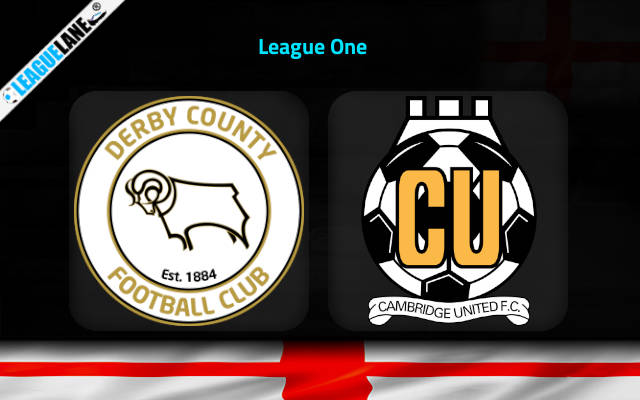 Derby vs Cambridge Predictions and Free Tips from our expert tipsters when the teams go head-to-head in League One on Friday, 30 December 2022.

Cambridge celebrated an important 2-1 victory against Shrewsbury last time. Earlier they were on a four-game winless run. They still have a lot of work to do if they wish to reach the top ten.

Derby are going in the right direction as they have picked up good form since early November. They are sixth in the league and managed to hold their rivals Bolton in a goalless draw recently.

The host are unbeaten in the last five head-to-head meetings. Do note that both teams will be playing at Pride Park after nearly thirty years.

Who will win the match between Derby and Cambridge?

We are backing Derby to take all three points from this game. They are the heavy favourites to win as they have an excellent unbeaten record against Cambridge.

Another reason is that the visitors are yet to win an away fixture since late October.

Three of the last five meetings between these two teams ended in a goalless draw. This fixture is not a high-scoring one.

The only time both teams scored in this fixture was back in 1992. The visitors managed to score two goals against Shrewsbury in the league recently.

The first tip is that Derby will win both halves – at 2.37 odd. Back in October, Derby won both halves of the game against Cambridge. Also, the same result was observed in their 4-0 win at Pride Park against Forest Green earlier this month.

Our second tip is that David McGoldrick to score anytime– at 2.37. He scored a hat trick against Forest Green at Pride Park recently. We can expect him to score against Cambridge.