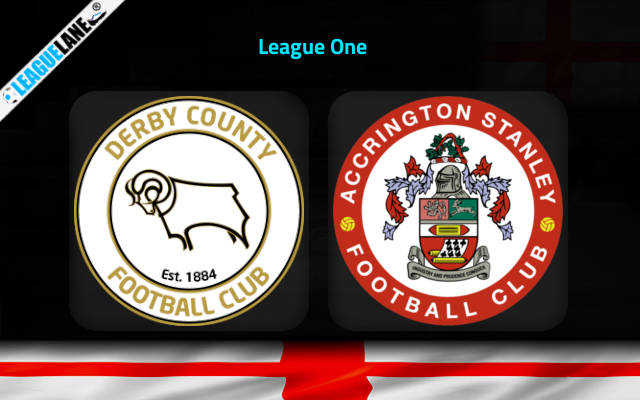 Derby vs Accrington Predictions and Free Tips from our expert tipsters when the teams go head-to-head in League One on Monday, 2 January 2023.

Accrington lost their tenth game of the season as they lost to Morecambe by 2-0. This result finally ended their three-game unbeaten streak. Their main strength is in their away matches as they have won four of their last five away fixtures.

At the same time, Derby had to settle for a point when they played against Bolton in a goalless draw. They are unbeaten at home since late October. They will aim for their tenth win as they have played well in this fixture in the past.

Both teams have met on two occasions in the last three years. The host have won both games by a good margin. The visitors are yet to win a single game against this team.

Another interesting fact is that this is going to be the first time both teams will be playing at Pride Park.

Who will win the match between Derby and Accrington?

Derby will most likely win this fixture. The two main reasons are that they have a strong unbeaten record against Accrington since 2019. Also, they have not lost a home fixture in the last two months.

On top of that their opponents’ are on a three-game winless run.

This fixture is not a high-scoring one. The visitors have not scored a single goal against this team in the last two head-to-head meetings.

It is unlikely that both teams will score in this fixture. Derby have kept a clean sheet in the last two meetings against Accrington. Moreover, they did not score any goals when they played against Morecambe in the league recently.

The host have won both halves of the game in their last two head-to-head matches. The same trend was observed when they defeated Forest Green recently. Therefore, the first tip is that Derby will win both halves of this game– the odd for this tip will be at 2.60 odd.

Our second tip is that Under 2.5 goals – at 1.90. The visitors have not scored in this fixture on two occasions. When these two teams clashed back in 2019 the score line was 1-0.