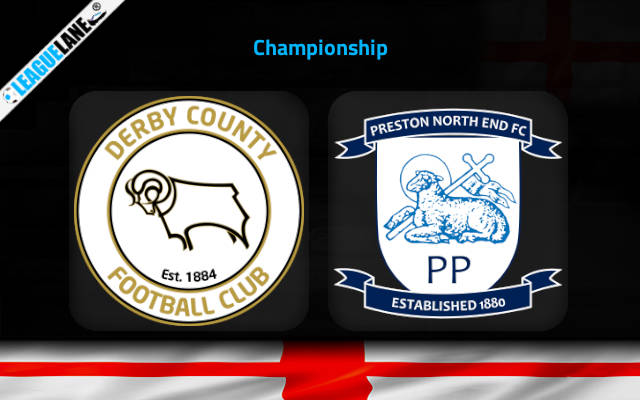 Sitting at the rock bottom and been reduced 21 points due to Financial problems, Derby County is set to host the mid-table side Preston North End at Pride Park, this Saturday.

The Lilywhites are at the 14th spot on the standing with 51 points from 38 games. They won 12 times in the league while drawing on 15 and losing on 11 other occasions. The side is unbeaten in 15 of their 18 most recent matches in the league.

Following a run of only conceding 5 goals across a 9-match spell, Preston suffered a 4-0 defeat at Luton Town last time out in the Championship. It was their worst league defeat since April 2021. Ryan Lowe’s men have slotted home 5 times throughout their previous 6 matches.

On the other hand, Derby County resides at the rock bottom closing the 24th position on the table with a mere 25 points. Of the 39 matches played, they won 11 times in the league while drawing on 13 and losing on 15 other occasions. The home side are currently fighting relegation due to their point-reduction. If not they would’ve been one or two spots below Preston.

The Rams head into this game after a 1-1 league tie against Coventry City. Derby County have picked up just 4 points in their last 7 league games, although those points were all won at home. Under three goals per match were recorded in 5 of their past 6 fixtures.

The Rams lost only once from their past 9 league schedules fixed at home. They are also unbeaten in their last 2 home league matches.

Going into this one, Preston North End have not won away from home in their last 3 league games. However, they have won their last 2 outings to Pride Park.

We feel that, both sides could well end up finding themselves level here, with both teams capable of netting. Therefore a draw seems likely.