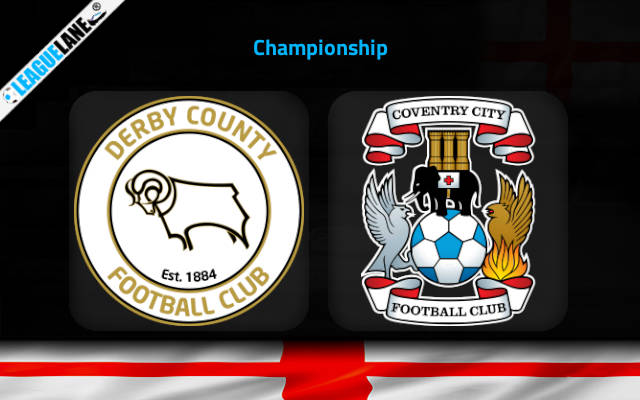 Derby continue to deal with the consequences of the 21-point deduction by the league earlier in the season. They are now placed 23rd in a table of 24, and they need a surplus of seven points to climb over the cut-off.

And they have just eight fixtures remaining, while teams just above them have games in hand.

Thus, it goes without saying that the team is under massive pressure, and they are desperate for a win. A draw at this point is totally useless to them.

Coventry, who are going after a top-six finish, will try to make good use of this fact. They have a fixture in hand, and they need a surplus of just five points to climb level with the sixth-placed squad.

Moreover, they also have a good h2h record against this rival over the years.

Judging these observations, expect a win for Coventry this weekend at the Pride Park.

Derby lost 3-1 on the road the last match-day, against Blackburn. They had lost five of their past six overall fixtures, and they had also remained winless in 11 of their preceding 15 games.

Do also note that they have conceded a total of five goals from the past two fixtures alone.

On the other hand, Coventry registered a 4-1 win at home the past game week, against Sheffield United. They were also unbeaten in seven of their past ten overall fixtures, and they had won three of their past six games as well.

Moreover, they also have a dominant h2h record against this rival over the years.

Taking into account these observations, expect a win for Coventry this weekend. And considering the desperation of Derby, anticipate goals in plenty too.

Tips for Derby County vs Coventry