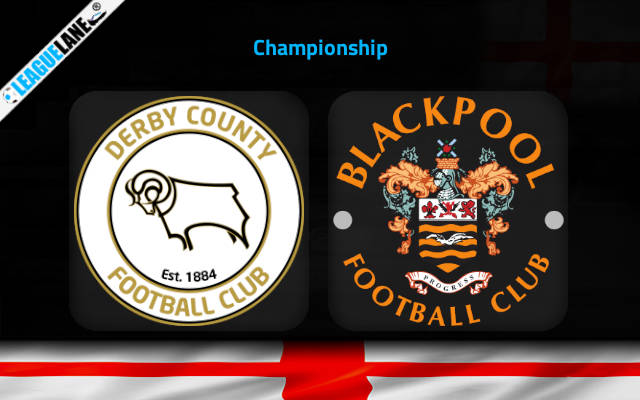 Derby County is still in the bottom of the league table with only 1-point for the team. The penalty for breaking the rules has affected the team very much, putting them in the last position.

The hosts lost their last match against Bristol City last weekend ending the match in 1-0 FT score. Derby has the least chance out of the teams in relegation zone to get out of being degraded to a bottom league.

Blackpool are exhibiting a poor performance at the moment. Their last match against Luton Town ended with 0-3 FT score in favour of Luton. The away team stays in the 15th position in the league table with 27 points to their name.

Derby Count has a long way to go, if they wish to avoid relegation. Their performance in the last matches is not satisfactory, having only 1 win in the last 10 matches and they have lost in their last 2 matches.

Their last home match against Queens Park Rangers ended in a loss for the team with 1-2 FT score. However, the team has 3 wins from their last 10 home matches and they have scored in 8 of the 10 matches.

Blackpool is currently on a 6-game, no-win streak and is moving down the table with each passing game. Their last away match was against Birmingham City in which the match ended with 1-0 FT score in favour of Birmingham. They are also on a 2-game no-win streak in their away matches as well.

Both teams have not scored in their last matches. Anyhow, the teams will look to break their streak of bad performances in the next match. Blackpool will look for an upper-hand while Derby will look to increase their points.