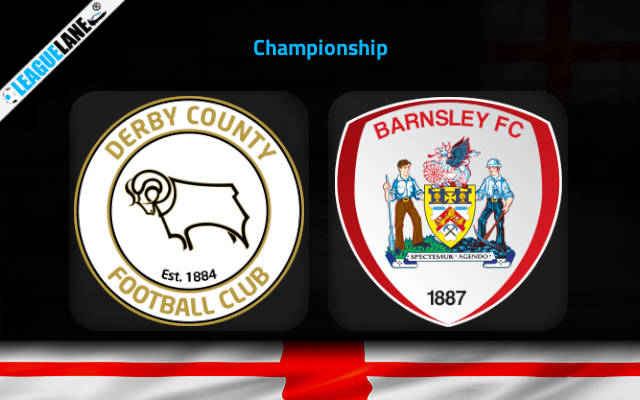 Having not won a single match since the reverse fixture on early November, Barnsley have won 3 of their last 4 games to lift themselves off the bottom of the Championship and mark successive wins for the first time this season. Wayne Rooney’s side are below them after losing the last 2 games in a row coupled with their early denial of 21 points due to Financial circumstances. The two go h2h this Saturday at Pride Park where The Tykes will be visiting for the 36th round of Championship.

The visitors are at the 22nd spot on the standing with 23 points from 33 games. They won 5 times in the league while drawing on 8 and losing on 20 other occasions. They scored 24 in total while conceding a sum of 48 which shows some room for improvement in defense is needed.

Poya Asbaghi’s side bounced back, though with a win on their travels against Hull City last midweek before doubling up by securing a 3-2 win over Chris Wilder’s Middlesbrough last weekend.

On the other hand, The Rams reside just below them at the 23rd position on the table with only 21 points. Of the 34 matches played, they won only 10 games while drawing and losing 12 times each. Their total goals to conceding ratio stands at 34:38 thus far.

Derby County lost the last two league schedules to Millwall and Luton amid the club being on administration 5 months ago on financial crisis. They have failed to prevent opponents from scoring in 5 of their previous 6 clashes, leaking 10 goals in the process.

The unexpected result saw Derby’s fellow relegation rivals rise above the Rams at the foot of the table and establish a two-point lead while Wayne Rooney ‘s side are in action this midweek at Cardiff City.