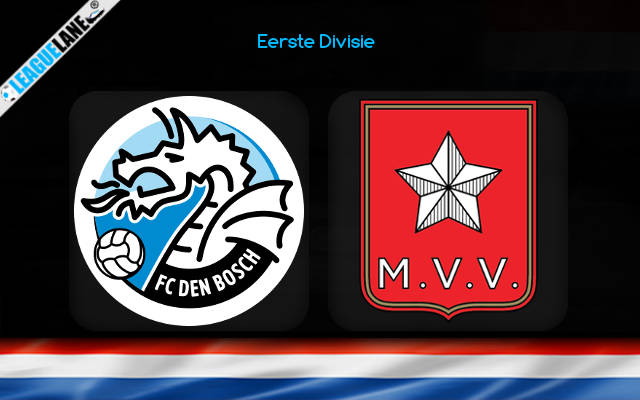 MVV Maastricht are highly unstable losing back to back league fixtures. Their awful state continues as they lost 10 times from the last 11 games across all competitions while a win happened on the other. Den Bosch are also on a dreadful run losing 7 times from the last 8 league fixtures. They haven’t even secured a win this year and hopes to turn the tables as they encounter the Blues who are also on the same page, this Friday at De Vliert for the 30th round of Eerste Divisie.

The hosts are at the 15th spot on the standing with only 27 points from 28 games. They won 8 times in the league while drawing on thrice and losing on 17 other occasions.

Den Bosch has been thrashed previously by Excelsior by 0-4. From the last 5 fixtures, they scored only once while the opposition bagged a total of 9 while there were 4 incidents where the hosts couldn’t even get onto the scoreboard.

On the other side, Maastricht resides at the 17th position on the table with 26 points. Of the 28 matches played, they won 8 games while drawing on twice and losing on 18other occasions. They scored only 28 in total while conceding a sum of 57 which exposes their defensive weakness.

The visitors lost back to back league fixtures against Dordrecht and Breda. Over the prior 5 league fixtures, they have conceded a total of 13 goals while their own forwards scored only 4 times.

We envisage a win for the home team as they tend to give better results at home while Maastricht lost 10 out of the 14 games played on road this season. Considering both sides are on distress as of late, a dire need of a victory will make this game to be exciting.