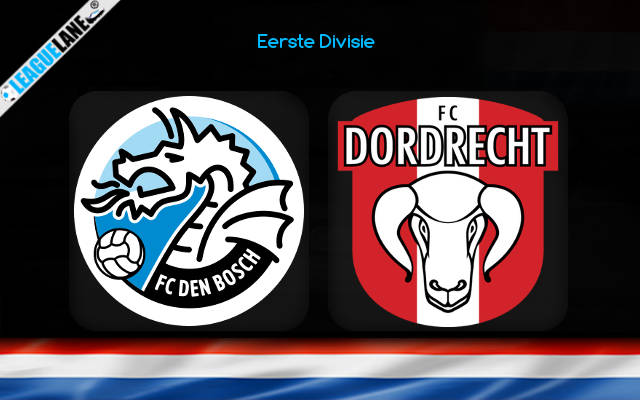 After continuous winless matches in Eerste Divisie, Den Bosch seems to have found their stand in the recent matches. The team has got more losses in their matches than both their wins and draws combined. However, they have achieved wins in three of the last five matches. Their poor performance has put the team in the bottom half of the league table and they have got only 37 points from their matches.

Den Bosch has played their last match against Telstar. In the match, Den Bosch scored two goals while Telstar could score only one, ending the match with 1-2 FT score.

Dordrecht has lost in yet another match after their last match against Eindhoven. Eindhoven scored the only goal in the match in the first five minutes and maintained their lead till the end. The match ended with 0-1 FT score.

Dordrecht’s recent matches have given the team mixed results. From the last ten matches, the team has got three wins, three draws and four losses. They still stay in the bottom half of the league table at the 16th position with only 32 points from their matches.

Den Bosch’s recent matches have given the team some room to breathe. They had a winless streak which had lasted for over ten matches before their win against MVV. Dordrecht has been inconsistent with their form in their matches this season. They can’t seem to keep their form for long, which puts the team in a vulnerable position in the matches.

Den Bosch currently has an unbeaten streak in their home matches, which have lasted for over seven matches. Dordrecht, on the other hand, has played poorly in their away matches. They are winless in the last four road trips.