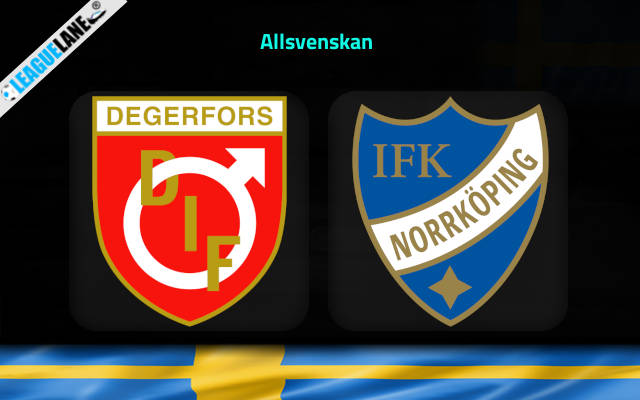 Matchday 13 of Allsvenskan is starting this week as Degerfors who are second in-line in the relegation zone play host to Norrkoping, where both these sides differ by 8 points and 3 places. These two sides will be seen locking horns at Stora Valla, this Saturday.

Norrkoping is at the 11th spot on the standing with 15 points from 12 games. They won 4 times in the league while drawing thrice and have lost on 5 other occasions. The visitors are more of a defensive side as they have conceded only 14 goals so far while their poor offensive side have netted only 15 times.

The home side played Djurgarden in their last game and they drew 1-1 in that game while having 51% of possession. Norrkoping come here on the back of a 5-game winless run across various competitions and they have been scored against in 5 of their last 6 matches.

On the other hand, Degerfors resides at the 15th position on the table with a mere 7 points. Of the 12 matches played, they won just 2 times in the league while having drawn once and have lost on 9 other occasions. They failed to score in 12 of their last 28 matches this season and they have the most awful attacking front this season, netting in only 9 times thus far.

The visitors will be hoping to bounce back here after a 2-0 Allsvenskan loss in their previous game against Goteborg. Degerfors have lost 13 of their past 20 matches and they need at least 3 more points to escape the drop zone.

Norrkoping are without a win away from home in their last 2 league games. But they have scored 2 or more goals in 10 of their past 20 matches. They lost only once from their last 4 away league fixtures.

Meanwhile, Degerfors form hasn’t been good, as the team has won only 2 of their last 12 matches. In their last 14 home matches in Allsvenskan, they have conceded at least one goal.

We therefore feel that a narrow win in favor of Norrkoping will be seen this Saturday.