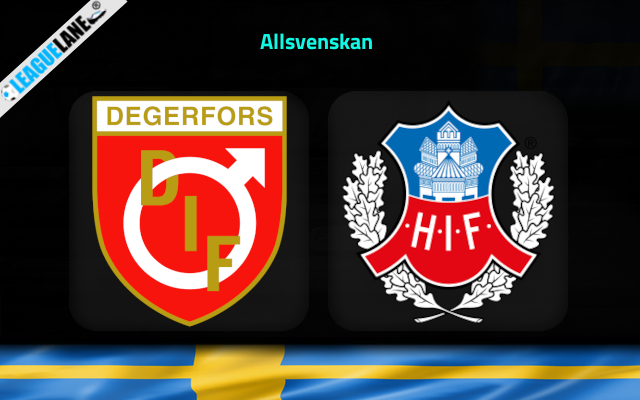 Degerfors had a dreadful start to this season recording a set of negative displays. They lost each of their first six fixtures this season. Their desperation of recording a positive display ended up in the last game in which they sealed their maiden three pointer this season.

Degerfors recorded a 2-3 win on road against Sundsvall in their most recent league fixture to end up their 6 game winless run in the league. They will be hoping to make that win count with the aid of home advantage.

Meanwhile, Helsingborg also had a disappointing start to this season. They are winless in 7 of their 8 league fixtures this season. Their defensive and offensive line-up also looks disappointing. They will be hoping to end up their inconsistent run by sealing a positive display from their upcoming fixture.

Helsingborg recorded a 0-1 defeat in their most recent league fixture against Norrkoping at home. With that defeat, they are currently having a streak of four winless games in the league.

Degerfors are yet to record a home win this season. They lost each of their three home fixtures leaking goals at a fashionable rate. However, their recent positive display is somewhat enough to count on them when they play against this Helsingborg outfit who follows a disappointing inconsistent so far.

On top of that, Helsingborg have lost three and drew one of their total four league fixtures on road this season. Their winless run on road with a poor offensive and defensive line-up doesn’t offer anything competitive to count.

Therefore, we are backing Degerfors to seal a win from this fixture when they meet Helsingborg in an Allsvenskan fixture on Sunday.