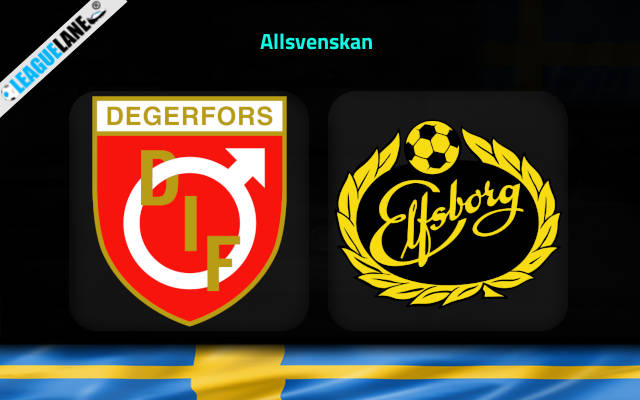 Degerfors are aiming to gain their first point in Allsvenskan while hosting the mid-table side Elfsborg at Stora Valla, this Sunday.

Elfsborg is at the 7th spot on the standing with 7 points from 5 games. They won and lost twice while losing only once so far. The visitors have finished fourth in the last season, achieving more wins than both their draws and losses when combined. Even having a poor start to the campaign, they are capable of getting back into form anytime.

The visitors will go into the meeting following on from a 3-1 Allsvenskan win with the defeat of Sundsvall in their last fixture. Elfsborg have been scored against in all of their last 6 games, seeing their opponents hit 7 goals in total, hinting that an improvement is needed in the back line.

On the other hand, Degerfors resides at the rock bottom closing the 16th position on the table with no points whatsoever. They lost all 5 games played so far and are in dire need of a win. The hosts have conceded 10 goals while netting in only twice up until this point.

Degerfors lost by 2-0 in their previous game against Varnamo, which was their 5th consecutive league loss. They have failed to score in the last 3 games and we could see their pathetic run continuing thus far. The hosts were also seen escaping relegation narrowly last season.

Going into this one, Degerfors have not won at home in their last 2 matches in the league. They even failed to score last time when they have seen playing at home. The side lost all the game played so far this season.

Meanwhile, Elfsborg have not won away from home in their last 2 league games. But they have drawn a game away and certainly has some courage to fight. Even though they started slowly in this season, when compared to how they finished the previous season, they remain one of the top teams in Allsvenskan.

As things stand, expect a win for the visitors this Sunday.