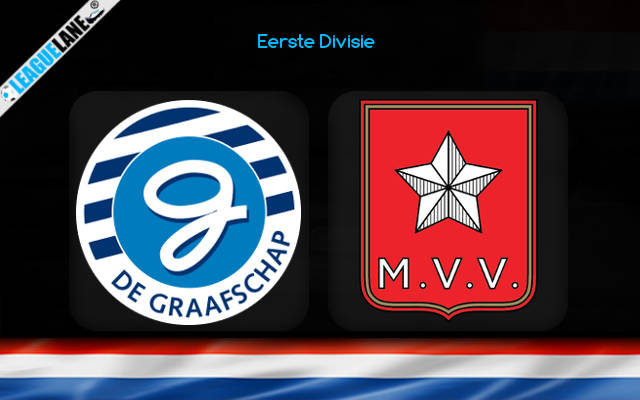 Game week 31 of Eerste Divisie brings us the match between De Graafschap and MVV Maastricht on Friday at Doetinchem.

De Graafschap played their last match against Roda JC, in which Roda scored two goals and defended their post well, stopping the opposition from scoring. The match ended in a loss for De Graafschap with 2-0 FT score.

Maastricht MVV has lost in yet another match in a row after their last match against Jong AZ. MVV couldn’t keep the lead the team had secured for long. Jong AZ scored two more goals after MVV scored two goals, ending the match in a loss for MVV with 2-3 FT score.

De Graafschap seems to be in a bit of trouble with their form in the recent matches. The team has not won in the last five matches and has failed to score consecutively in the last four matches as well. The team has moved down the table to the 9th position. They now have 47 points from their matches.

Maastricht MVV has played poorly in their matches throughout the season. The team now is on a loss streak which has lasted for four consecutive matches. They also only have one win to show from the last fifteen matches. The team stays second from the bottom of the league table with only 26 points from their matches.

MVV’s poor performance in their matches put them at a disadvantage when they face against Graafschap. Even if Graafschap has some trouble with their form, they can get back in form at any time and secure the win for them. Match against MVV will be a good opportunity for them to do so. Recent matches for MVV have ended with over 2.5 goals, with the opposition scoring the most goals.

The most recent home matches for Graafschap have ended with draws for the team. Adding the draws, the team is unbeaten in their last four matches. Maastricht has not had much luck with winning in their away matches. From the last seven matches, the team has lost in six and won in only one.

So, I believe the match will end in a win for De Graafschap.