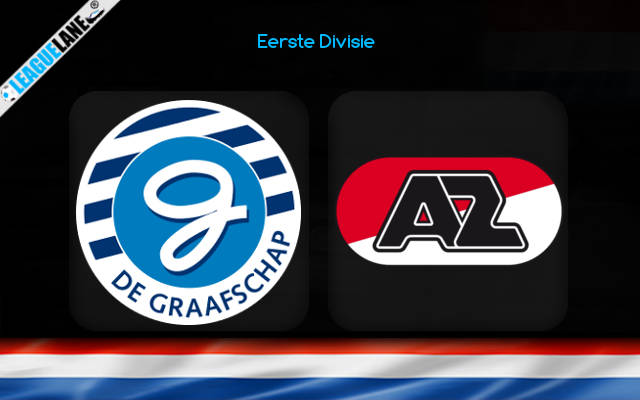 De Graafschap are languishing at bottom of the league this campaign. They have only managed to win a single game this season. They will host Jong AZ this weekend at De Vijverberg.

The host can be considered one of the most disappointing teams this season. Adrie Poldervaart’s side have lost over 55% of their league matches.

In their most recent match, Adrie Poldervaart’s side lost to Almere by 2-1. It was Charlison Benschop who scored the goal for Superboeren within the opening fifteen minutes. However, the team conceded two goals within the last twenty-five minutes of that game.

Following this result, Adrie Poldervaart’s side are in the nineteenth position.

The visiting team is just two points away from claiming the fourth position. However, they are going through a difficult phase. As they have won only a single game in their previous five fixtures.

In their most recent outing, Kenneth Goudmijn’s side lost to Willem II by 1-0. The team defended well for the majority of the game, however Pol Llonch scored the winning goal with nine minutes remaining on the watch.

On the other hand, the host have a good opportunity to win this game as the visitors are having bad form. However, It will not be an easy task.

It is important to mention that the host are on a two-game losing streak. Also, they have conceded five goals in their last two matches.

The one common factor between these two clubs is that, they have both lost their last two consecutive matches of the Eerste Divisie. Also, both teams have won only a single game in their last five outings.

Our first tip for this game is that Jong AZ Alkmaar will win- the odd for this tip will be at 6.00 odd. In the overall fixtures, the visitors are unbeaten in two of the last four matches, also they have won twice.

Moreover, the next tip is that Both Teams to Score -the odd for this top will be at 1.66. In four of the last five head-to-head meetings, both teams have scored plenty of goals.