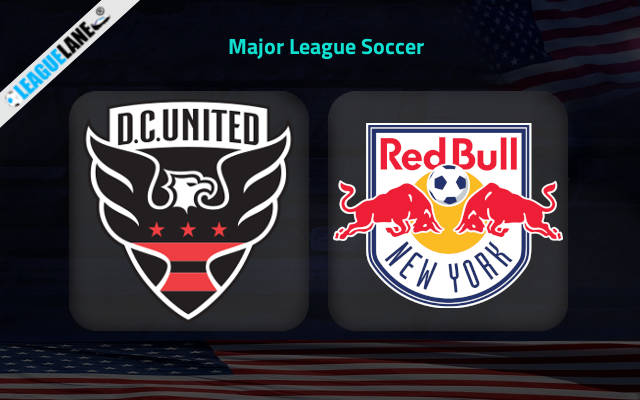 New York Red Bulls are hoping to stay undefeated in the fifth consecutive MLS affair on Sunday evening when they travel to Audi Field to battle bottom-half rivals DC United.

There will be a lot at stake on Sunday night at Audi Field as direct playoffs rivals DC United and New York Red Bulls take on each other.

The two sides are separated by a single point (NY Red Bulls have a game in hand, though) and they are both within striking distance (two and three points respectively) of the 7th-placed New York City in the Eastern Conference standings going into this match.

Several reasons suggest that we should be in for a fantastic clash here. DC United favored ultra-attacking football lately as each of the last four games they played saw the “Over 2.5 goals FT & Both Teams To Score” option coming in.

Hernan Losada’s men conceded two goals in each of the last two games. They, however, got away with a point from the mid-week’s clash against Chicago Fire, scoring two late goals inside the final eight minutes of the match at Soldier Field.

New York RB have been much better defensively of late, conceding three goals in the last four MLS games.

They definitely deserved the spoils on Wednesday against Toronto but had to settle for a 1-1 draw despite dominating the pitch throughout the entire course of the game (19 shots to Toronto’s 6).

The visitors will enter the game in higher spirits after going unbeaten in four league games on the trot. However, DC United have also won two in a row at home and they lifted the team’s spirits by netting two late goals in mid-week’s 2-2 draw at Chicago Fire.

The draw thus looks to be the closest of the three outcomes. The best betting option is Both Teams To Score at the odds of 1.70, though.