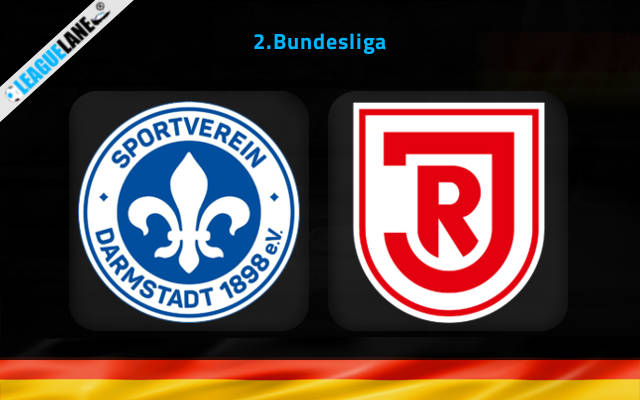 Darmstadt host Jahn Regensburg in the opening round of the new 2. Bundesliga season on Saturday afternoon at Merck-Stadion am Bollenfalltor.

Darmstadt’s new manager Torsten Lieberknecht will most likely need some time to bed in the new arrivals as the team lost majority of their key players from the last season. The hosts will thus begin the 2021/22 2. Bundesliga campaign without their top scorer from the previous term as Serdar Dursun’s contract expired.

Dursun was the main catalyst for Darmstadt’s 7th-place finish last season with 27 goals in 33 appearances.

Lieberknecht will also have to find way to replace the likes of Immanuel Hohn and Nicolai Rapp, who represented the core of the team’s back line in the previous term.

Darmstadt played just one genuine pre-season friendly in the pre-season, drawing 1-1 against top-flight side Stuttgart ten days ago.

Jahn Regensburg were one of the least efficient sides in the competition last season. They finished the campaign just five points above the red zone.

Much like their rivals, Jahn will miss several important players from the previous term, namely Sebastian Stolze who made a Hannover 96 move this summer.

Regensburg have been in action five times in July already, clinching four wins and one draw in a very successful pre-season campaign.

Jahn Regensburg have been very tough to break down in the off-season this summer. They kept clean sheets in four of the last five friendlies. Knowing that Darmstadt are without their key player and top scorer from the last season, we may expect the hosts to struggle to deliver in the final third in their opening game of the campaign.

Looking at the odds, the value has to be with the visitors who are 1.72 to leave Merck-Stadion am Bollenfalltor undefeated. You can alternatively back the Under 2.5 goals FT at attractive 2.20 odds.