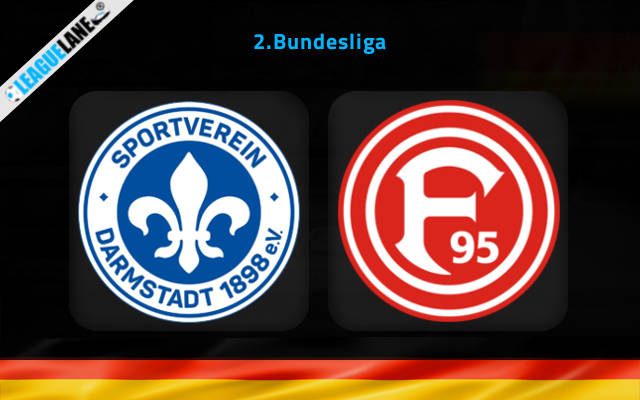 Since suffering a loss in their previous game against Heidenheim in Bundesliga 2 action, Fortuna Dusseldorf and their travelling fans will hope for a better result as they set foot in the Merck-Stadion am Bollenfalltor this Friday. The home team is confident from the 4 back to back wins and hopes to do the same this weekend.

The visitors sits at the 13th spot with 16 points in hand. From the 15 matches they played, they won and drew 4 of the matches while 7 of them ended in a defeat. They score goals but also concedes nearly the same amount resulting in at 19:22.

They have been scoring against in 6 of their last 6 games, seeing opposing sides hit 9 goals overall. In defense, they certainly need to improve. They lost 2 back to back games against Heidenheim and Dresden.

The home team sits at the 2nd position in the zone for Bundesliga promotion with 29points. Of the 15 matches they played, they won 9 of them while drawing 2. They lost 4 matches but they score plenty of goals in the league with goals to conceding ratio in at 37:17.

Their matches are said to be lively affairs lately with high scoring taking place each time. Over their past 6 games, a total of 20 goals have flown in for both sides combined with 16 of them were contributed by Darmstadt.

The hosts are in excellent home form while Fortuna Dusseldorf are performing poor at away schedules. Previous matches between the two have averaged 2.83 goals while BTTS has happened 50% of the time.

Due to the recent form and back to back wins in the league, we predict a home win this Friday. The visitors goes as a clear outsider into the game even though winning all h2h matches in the past, but this game is certainly not on their control.