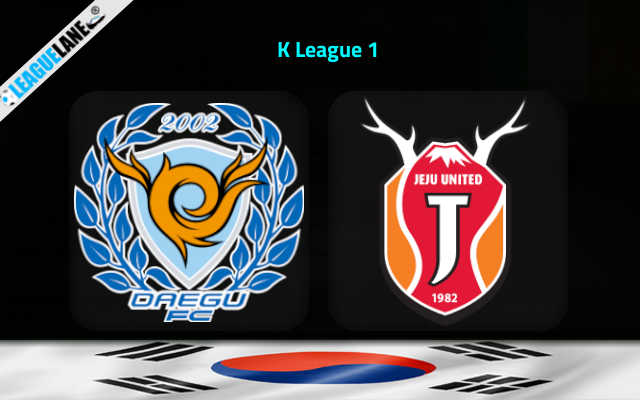 Jeju have been one of the best overall teams in the league this season and as a result they have climbed to the second position in the table. They have lost just thrice all through the campaign and only one other team has conceded fewer than them so far.

It also needs to be mentioned that they have lost just once away from home in the current league competition, and this only defeat had come against toppers Ulsan Hyundai.

Meanwhile, Daegu are placed in the bottom half of the table and they have seldom recorded wins lately. They have been letting in goals quite consistently, and importantly they have fared quite poorly in recent head0to-head encounters as well.

For the reasons expect Jeju to have the upper hand this Tuesday.

Daegu are on a 3-game winless run, and they had let in 2 or more goals in 3 of their past 5 fixtures. Do also note that they were winless in 6 of their past 8 overall matches.

On the other hand, Jeju are on a 2-game winning streak and had scored a total of 4 goals in the process. Moreover, they had won 5 of their past 8 road trips and they had scored 2 or more goals in 5 of their last 7 away games as well.

Considering these observations, expect Jeju to have the edge. But still Daegu have been on a good run at home lately and count on them to find the back of the net at least once.

Tips for Daegu vs Jeju United