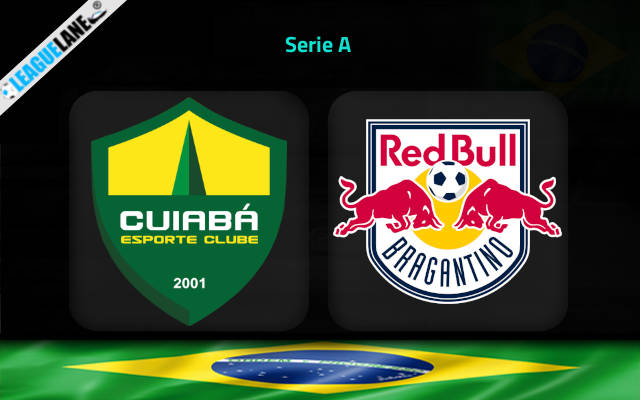 Gameweek 10 of Brazil Serie A is set for this Saturday as Cuiaba host Red Bull Bragantino who are just one points and a place below them. These two sides will lock horns at Arena Pantanal to escape falling into the drop zone.

Cuiaba is at the 15th position on the table with 11 points. From the 10 matches played, they won 3 times and drew 2 while having lost on 5 other occasions. They are only a point safe from the drop zone while having a poor offensive side. The hosts recently snapped their 3-game losing run.

The hosts will be hoping for more of the same after a 1-0 league victory over Corinthians. They have seen their defense breached in 5 of their previous 6 games, giving up 8 goals during that time.

On the other hand, RB Bragantino resides at the 16th position on the table with 10 points. Of the 9 matches played, they won only twice while having drawn on 4 and lost on thrice other occasions. They are without a win since the last 9 games played across various competitions of which 6 were losses.

Red Bull Bragantino will be hoping for a better result following a 0-2 league defeat last time out to Internacional. It was their second loss in a row with the same scoreline after the one with Goias in Copa Do Brasil. They have been scored against in all of their previous 6 matches, shipping 10 goals in the process.

Cuiaba won just once of their last 5 home matches this season. However they remain unbeaten in their last 4 h2hs of which they won twice. The hosts also won the last 2 home h2h games maintaining a cleansheet.

Meanwhile, Bragantino won only one away game this season. They also come here on the back of a 3-game winless run on road across various competitions.

Both sides are weak in their own perspective. We therefore predict a home win or draw in this upcoming fixture.