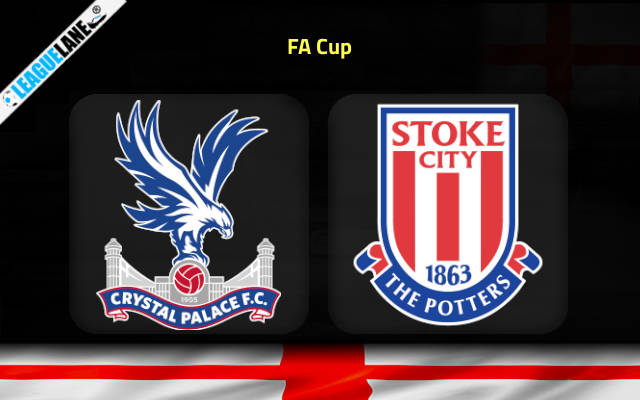 Crystal Palace are one of the prospects to secure a top-half finish in the English Premier League this season. They have had a tough schedule lately, and still they have managed to go on a satisfactory run.

In fact, since the end of November, their only defeats have come against teams placed in the top-seven of the table.

This Tuesday, they have an opportunity to make it to the Quarter Final of the FA Cup, and this will be a major confidence boost for the squad. And they have the luxury of playing at home, against a team from the second division.

Stoke are stuck in the bottom half of the Championship, and are on a long stretch of worrying performances. They have also been struggling on the road for quite some time, and most importantly, they have a poor h2h record against this rival over the years.

By the looks of things, expect a win for Palace this Tuesday at the Selhurst Park.

Palace were unbeaten in five of their past six overall games, and this sole loss had come against current European champions, Chelsea. The team had scored a total of five goals from their past two fixtures combined, and they have lost just thrice at home in the past three-month period.

On the other hand, Stoke are on a two-fixture losing streak, and also a four-game winless run. Moreover, they have won just six times on the road in the past nine-month period.

Considering these observations, and the h2h superiority of Palace, expect a win for them this Tuesday at the Selhurst Park.

Tips for Crystal Palace vs Stoke