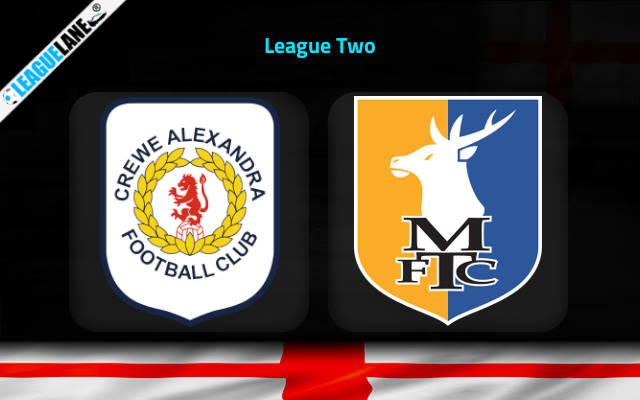 Mansfield journey to Alexandra Stadium on Saturday for the League Two meeting with hosts Crewe.

Crewe had a flying start to this season. They sealed back to back victories from the opening two fixtures. However, things were a bit slower for them further. They lost twice in the process too.

Going on, Crewe managed to climb up to the 9th spot in the league standings. The team had leaked 9 goals while scoring 11 in this season.

It also deserves to be mentioned that they were at the bottom spot in the League One standings the last year and all along they had let in goals in huge numbers.

Meanwhile, after a slow start, things are finally heating up for Mansfield and a 0-2 win against Gillingham in the previous round have extended their unbeaten streak to 3 games in the campaign.

As a result, they have climbed up to the safe zone spot in the league standings and are a point away from their counterparts. Clough can be thrilled with his team’s offensive line which have scored a total of 13 goals in the past 6 league fixtures.

The Railwaymen were winless in 5 of the past 8 appearances in front of their home crowd and had gone on a separate 3-fixture and 2-fixture winless streak in the process.

On the other hand, the Stags are on a 2-fixture winning streak on the road and had scored a total of 5 goals in the process.

Do also note that Crewe have not emerged victorious in the past 2 decades at this venue. Hence, we expect a winning performance from the visitors Mansfield on Saturday.