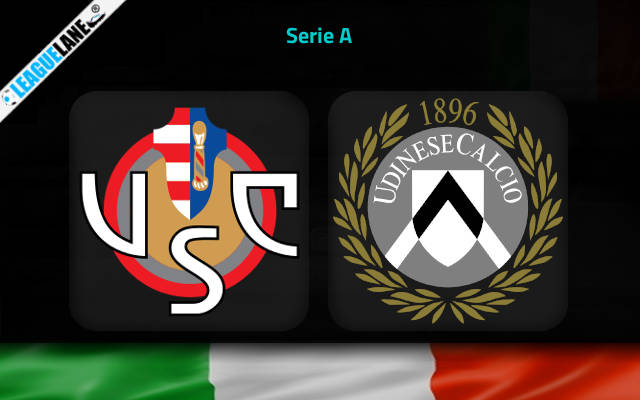 Udinese seem to have run out of gas of late as they only managed to claim two points in the previous three Serie A games.

The team led by Andrea Sottil will be hoping to get their campaign back on track on Sunday afternoon when they travel to Cremona to battle the rock-bottomed Cremonese in Gameweek 12.

Cremonese are now the only winless team in the whole league after suffering a 0-1 defeat to fellow strugglers Sampdoria last Monday, allowing them to pick up their maiden win of the season.

Massimiliano Alvini’s men sit at the very foot of the Serie A ladder with just four points in eleven rounds.

The hosts have scored only nine goals so far in the season. They had 21 attempts in the previous round’s affair against Le Samp but none resulted in a goal.

This is why we see this match as a great chance for Udinese to rebound from an unexpected home defeat to Torino (1-2) seven days ago.

Sottil’s men are still inside the top-six in the Serie A standings. In their defense, they did have a tough schedule of late featuring the games against Atalanta and Lazio in the last three rounds.

Udinese kept just one clean sheet in the last six league games. They allowed two goals to Torino and three goals to Monza in mid-week’s Coppa Italia action beforehand. This is why we fancy them to concede again here.

However, the visitors are still big favorites based on the performances these two teams have shown so far in the season. We like the 3.60 odds offered for Udinese to win & Both teams to score pick. You can also try with Udinese to win 1-2 as the correct score bet at the 8.50 odds.