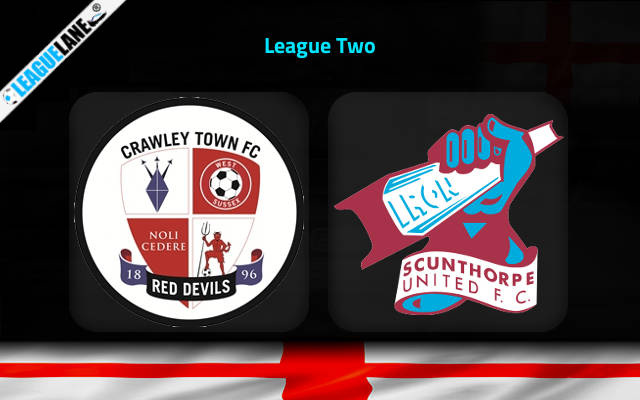 Scunthorpe United are without a win since the last 4 league schedules while they got defeated in the past 5 League Two games on road in succession. They are first in line to be relegated. Crawley are undefeated on back to back fixtures and has lost only once from the last 5 league games. The upcoming 35th round of League Two is set at The People’s Pension Stadium where the Irons will be visiting this Saturday.

The Reds are at the 12th spot on the standing with 44 points from 32 games. They won and lost 12 games each while drawing on 8 other occasions. They scored 41 in total while conceding a sum of 44 which shows some room for improvement in defense is needed.

Crawley Town head into this fixture following on from a 2-2 league stalemate against Oldham. They have been finding it hard to keep clean sheets recently, but they’ve also done enough to hit the back of the net themselves. Looking at their last 6 games, they have conceded in 6 of them while also getting on the scoreboard in 5 of those games.

On the other hand, Scunthorpe resides at the rock bottom closing the 24th position on the table with a mere 23 points. Of the 34 matches played, they won 4 times in the league while drawing 11 times and losing on 19 other occasions. Their total goals to conceding ratio stands at 24:59 which is the worst in the tournament, showcasing their dreadful lineup.

The visitors lost the last league schedule to Sutton United by 1-4. The attacking players from Scunthorpe has been starved of goals over their last 6 games, netting the poor return of only 3. In those matches, The Irons have also seen the overall goal tally against them equal 10.

In their last 49 games across all competitions, the visitors have recorded only 4 wins. Their previous 5 defeats in a row further adds us to favour for the home side to win this upcoming game.