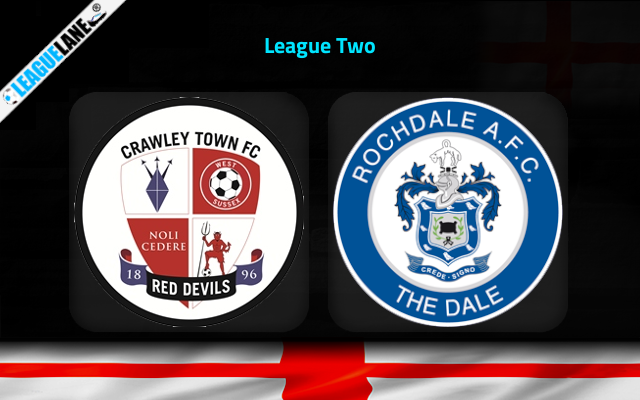 Neither Crawley nor Rochdale are enjoying a consistent form in the league of late. Both these outfits will meet each other in a League Two fixture at The People’s Pension Stadium on Saturday afternoon.

Crawley have been following a disappointing form lately. They sits 13th on the table with a total of 48 points. They have a decent offensive and a disappointing defensive lineup.

However, they have managed to record a win in their most recent league fixture. The match was against Swindon at home. They were on the back of three subsequent defeats before recording the above 3-1 win. They will be hoping to make that win count.

Meanwhile, Rochdale sits at 19th on the table with a total of 40 points in hand. They have dropped points in many of their recent league outings. As a result, their gap with the danger zone decreased to 9 points. They owns a decent offensive and an average defensive side.

Rochdale recorded a 0-1 defeat against Mansfield in their most recent league fixture. With that defeat, they are now on the back of 6 subsequent winless games in the league. They will be desperate to record a win following such a disappointing streak.

Crawley are unbeaten in four of the past 5 league fixtures at this venue. They have also scored in four of those.

On the other side, Rochdale have only won once in the past 5 league fixtures on road. They are having a dreadful form wearing the away jersey. Therefore, we can’t expect them to on the winning side as well as on the losing side.

They have a decent head to head stats against Crawley. We can see them scoring goals in big numbers against Crawley in their three h2h meetings. Hence, we are expecting them to record a score draw at the end of this one.