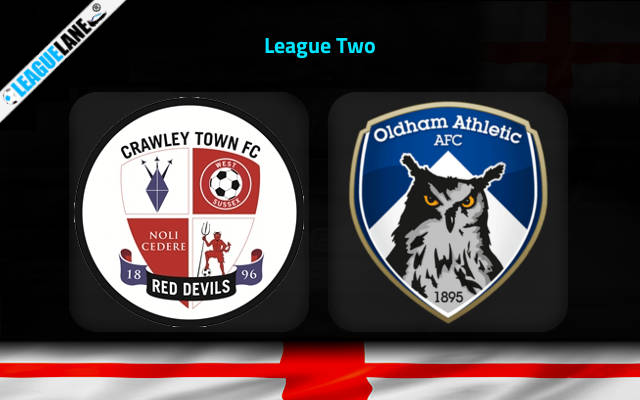 Crawley Town lost the previous league fixture which ended their 4 game unbeaten run in the league. They are level on points with Bradford and have lost two of their last 3 games against Oldham Athletic on road. The visitors are on a good run of form in the league as they are unbeaten in the last 5 fixtures. They are just above the relegation zone and hopes to widen that gap as they travel to Crawley at the People’s Pension Stadium for the 22nd round of League Two.

The Reds are at the 15th spot on the standing with 40 points from 30 games. They won 11 times in the league while drawing on 7 and losing on 12 other occasions. They scored 37 in total while conceding a sum of 41 which shows some room for improvement in defense is needed.

Crawley lost the last league fixture to Hartlepool by 1-0. The home side has scored in the last 4 games in front of their own fans while having failed to score in another 2 home games this season.

On the other hand, The Latics reside at the 22nd position on the table with only 29 points. Of the 30 matches played, they won only 7 games while drawing on 8 and losing on 15 other occasions. Their total goals to conceding ratio stands at 30:46 so far in the league.

Oldham won the previous league fixture by 2-0 against Bradford City. They have fired blanks in 9 games this season and that is 43% of games where they have not been able to find the back of the net.

We feel that an away win is highly likely as they are recently on a good form in the league. The hosts won only 4 times out of the 14 games played at their home ground which further adds up to the point.