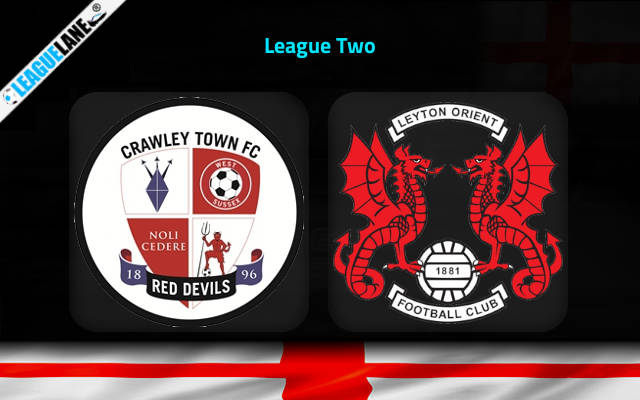 Crawley Town played their last match against Sutton United, in which Sutton scored three goals and defended their side well, leaving Crawley goalless. The match ended in a loss for Crawley with 3-0 FT score.

With the loss in the last match, Crawley has now lost consecutively in the last two matches. The team has shown inconsistency with their form. The team may be unbeaten in a couple of their matches when their form drops, leading to a cold streak for the team. Currently, the team stands 12th on the league table with 60 points from their matches.

Leyton Orient has played well in their recent matches, which has helped them to move up the table. However, the team didn’t have enough matches to move them further up the table and secure a position for playoffs. From the last ten matches, the team has got six wins, one draw and three losses. The team now stands 13th on the league table with 55 points to their name.

Even though both teams have improved their performance and have moved up the table, they have no chance to move up to an upper league. Both teams have won in five or more matches in the last ten games.

Crawley has the advantage of playing in their home ground where the team currently keeps an ongoing win streak which has lasted for four matches. The team has kept clean sheets in three of them as well. Leyton Orient has played with an inconsistency in their away matches. They have got to win after loss in their most recent away matches.

Looking at the records, the match will most likely end in a win for Crawley Town. With their current form in home matches, we can expect the match to end with a clean sheet as well.