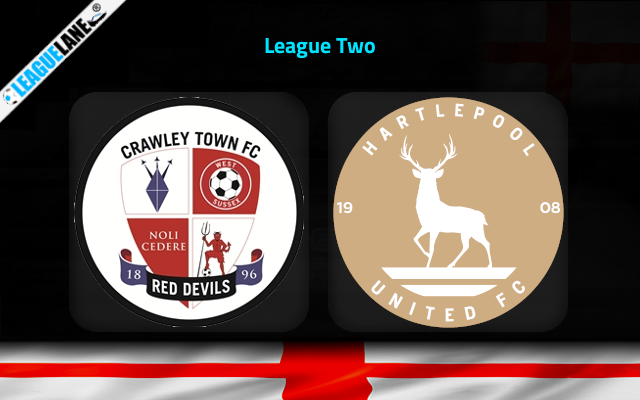 Crawley vs Hartlepool Predictions and Free Tips from our expert tipsters when the teams go head-to-head in the England League Two on Friday, 09 December 2022.

Currently 19th in the League Two table, Crawley are unable to win even against the top ten teams in the league. However, they will head into this fixture off the back of a 2-0 victory over Swindon.

Meanwhile, Hartlepool lost the past three league matches consecutively and have dropped into the bottom spot of the table. The current slump of the away side will boost the home team Crawley with spirits.

They have only met 8 times. Crawley won three, drew three and lost two of those 8 encounters against Hartlepool.

Hartlepool won both the meetings against Crawley in the last season. It is worth noting that none of the clashes between these two in the past 6 years had goals over 2.5.

Who will win the match between Crawley vs Hartlepool?

Crawley is currently on a two-fixture unbeaten streak. This match is a great chance for them to maintain it. their opposition for Friday’s League Two game, Hartlepool, is currently the worst team in the campaign.

On top of that, Crawley is having a five-fixture unbeaten streak at home. Four of those were victories too. Therefore, expect a victory for the home side on Friday.

The previous three home matches of Crawley recorded fewer than 2.5 goals ft. Since Hartlepool owns a poor offensive line, the chances of over 2.5 goals are very slim.

Crawley has kept a clean sheet in the last three home matches. On the other hand, Hartlepool have scored just two goals in their last five games. So we don’t expect the possibility of both teams to score.

Taking into account these observations, we like to back Crawley to win at 2.10 odds. For the second tip, we like to place the Under 2.5 goals bet at 1.85 odds considering the goal trend of both these sides.