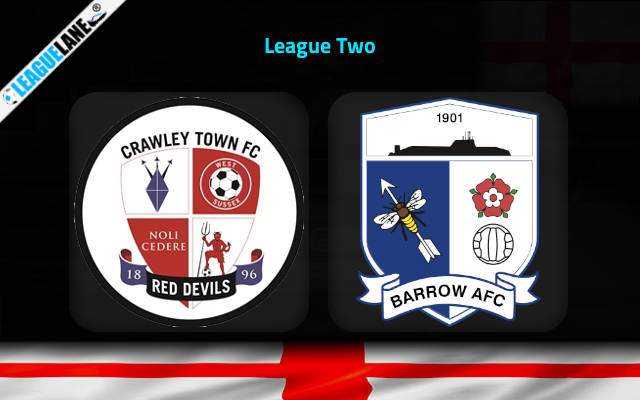 Crawley Town has not exhibited their best performances in their recent matches. From the last ten matches, the team has got three wins, two draws and five losses. Crawley stands 13th on the league table with 51 points to their name.

Crawley Town’s loss in the last match ended the team win-streak, which had lasted for two consecutive matches. They played against Swindon Town, in which Swindon scored their two goals even before Crawley could score their first and maintained the lead until the end.

Barrow played their last match against Port Vale. Even though Barrow had scored the first goal of the match, Port Vale came from behind and secured the win with a last-minute goal. The match ended with 1-2 FT score.

Both teams have not played well in their matches this season, resulting in both of them staying at the bottom half of the league table. Barrow currently has a loss streak which has lasted for over three consecutive matches. The opposition of Barrow has scored over 1.5 goals in this match as well. Even though Crawley has shown an inconsistency, they have played better than Barrow in their matches. They will hope to make up for the win streak they lost after the last match as well.

Crawley had a rough start to their home matches this season. However, they have shown improvement in their form since December. Currently, they are unbeaten in the last two matches.
Barrow has got mixed results from their recent away matches and has scored under 1.5 goals in their last five away matches.

The match is more likely to end in a win for Crawley Town. Looking at the records, we can expect the match to end with over 2.5 goals, with both teams contributing to the scoreboard.