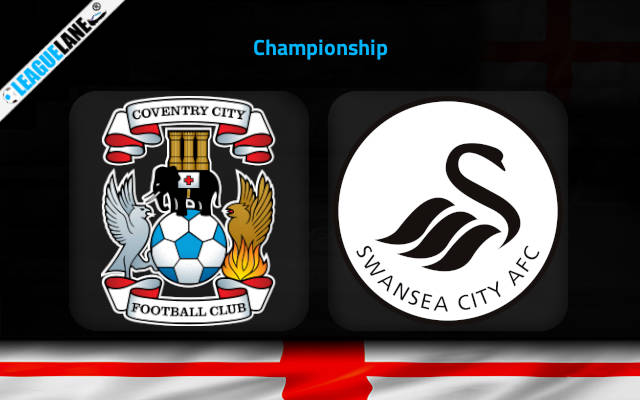 Coventry vs Swansea Predictions and Free Tips from our expert tipsters when the teams go head-to-head in the England Championship on Saturday, 17 December 2022.

Coventry will be hoping to bounce back from their previous fixture’s 1-0 defeat against Reading. They were having a four-fixture winning streak before dropping points in that fixture.

Meanwhile, Swansea extended their winless thread to six games after losing 0-1 to Norwich in their previous outing. As a result, they have dropped into the 10th position in the league standings.

Swansea have been the dominant force in the recent history of this head to head match-up. The latest encounter had finished in a 3-1 win for Swansea.

At this venue, the visitors are having a 100% unbeaten record against Coventry.

Who will win the match between Coventry vs Swansea?

We are expecting a victory for Coventry despite of the head to head dominance of Swansea. Because Coventry have been delivering impressive displays consistently of late.

On the other side, Swansea is having a five-fixture winless streak on the road. Therefore, expect a pleasant day for the local supporters at Coventry Building Society Arena.

Coventry won previous three home fixtures by preventing the opposition from scoring. Three clean sheets in a row will definitely boost their defense to record more of those.

Since three of the last four away fixtures played by Swansea were low-scoring affairs, expect this match to have under 2.5 goals ft.

By the looks of things, we don’t expect this fixture to have goals from either sides.

Considering all these observations, we like to place Coventry to win at 2.45 odds as the main bet for this one.