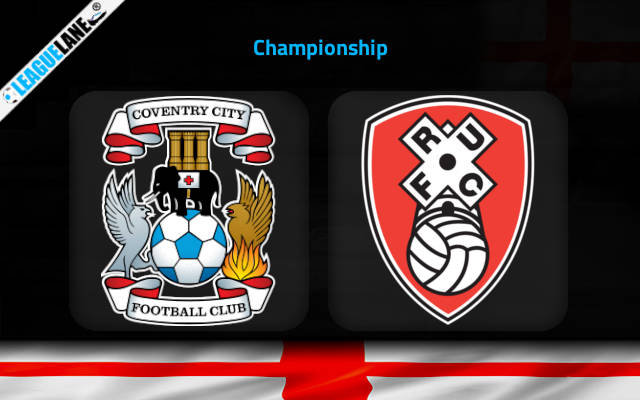 Coventry line up against away team Rotherham in a Championship fixture at Coventry Building Society Arena on Tuesday.

They are on an average stretch of performance this season. From the last 6 league matches, the team has got two win, one draw and three defeats.

Going on, they are traveling to Coventry after suffering a 2-4 defeat against Hull City in their last Championship match. They had a two-game winning streak before conceding that defeat and will be hoping to regain that lost stretch.

Meanwhile, Coventry has been displaying a great transformation in the last three games. Heading into this fixture with three wins in a row, there is no doubt that they will have the highest of spirits.

Do also note that the team had sealed a clean sheet in all those three successive victories. Their firepower looks to have enough of potential too.

By the looks of things, expect a pleasant day for the local supporters on Tuesday at Coventry Building Society Arena.

The Sky Blues sealed a clean sheet win against current 5th placed Sheffield United in their most recent home match. Do also note that, both of Coventry’s home wins this season have been clean sheets.

Even though Rotherham sealed an away win over the likes of Stoke in the most recent match, their overall performance on road trips this season is unlikely to be satisfying.

On top of that, Coventry owns a good head to head form against this opponent in the recent history. Therefore, expect a win for the hosts on Tuesday.