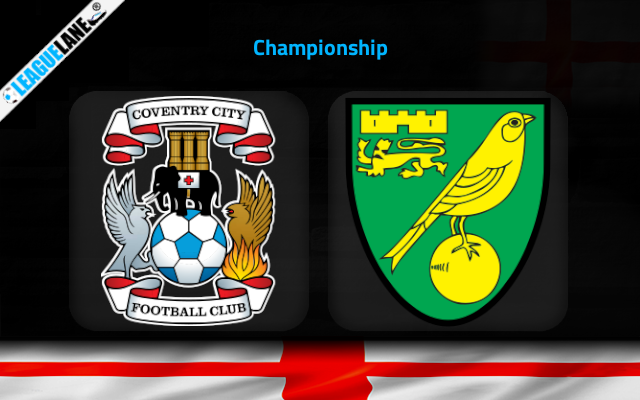 Coventry vs Norwich Predictions and Free Tips from our expert tipsters when the teams go head-to-head in the England Championship on Saturday, 21 January 2023.

Norwich finally sealed a win in the previous outing against Preston to end their five-game winless streak in the league. A set of defeats were affecting their run and they will be hoping to bounce back with this win further.

They will trip to Coventry Building Society Arena with enough of spirits to face the hosts Coventry, who sits outside the top half in the standings following an inconsistent winless form.

Norwich won the previous two Championship meetings and are currently having a seven-game unbeaten streak against Coventry.

Coventry lost the past two clashes at this stadium. They have let in a total of four goals from those two h2h meetings.

Who will win the match between Coventry vs Norwich?

Norwich have been successful in bagging three pointers at frequent intervals of time on the road. They won three of the past four road trips.

Meanwhile, the overall inconsistency have affected Coventry even at home. They drew three of the past four home matches in which the bookies considered them as favorites.

Moreover, the h2h tradition are in favor of Norwich too. In that case, we are expecting a win for Norwich on Saturday.

We expect this match to have over 2.5 goals. The main reason for that is the defensive side of both these sides which seems capable of leaking goals which records a total of goals over 2.5 when the referee blows the final.

We have already mentioned about the defensive side of both sides. They both will be able to enter the score-sheet and we expect a both teams scoring affair on Saturday.

Norwich is at the edge of the safe zone and will be hoping to enter the spot by sealing victories consistently. A winless Coventry as their opponents in the coming fixture might help them to pave the way to it.

Norwich to win at 2.40 odds will be our main betting tip here. For the second tip, we like to place both teams to score option at 1.73 odds considering the decent attacking and weak defensive side of both teams.