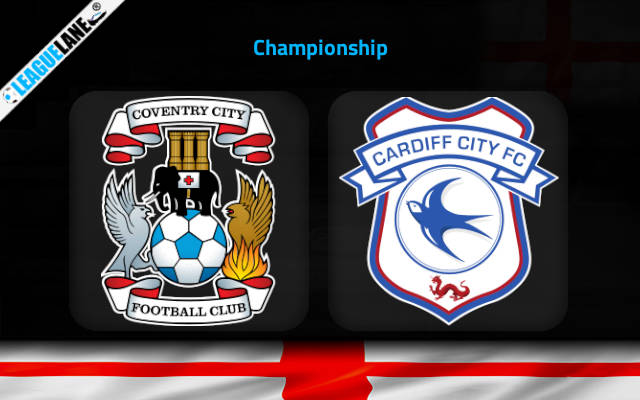 Coventry vs Cardiff Predictions and Free Tips from our expert tipsters when the teams go head-to-head in Championship on Thursday, 29 December 2022.

Cardiff are facing a winless drought in the league. They are struggling to win all three points as they are on a five-game winless run. They managed to hold Stoke in a 2-2 draw on their last away trip.

Meanwhile, Coventry lost to Sheffield United by 3-1 last time. However, they are a different team when they play at home as they have won four of their last five home matches. We can expect the visitors to face difficulties at Coventry Building Society Arena.

Back in October, the host won this fixture by 1-0. In the last two years, both teams have played in five head-to-head matches and the host have won on three occasions.

At Coventry Building Society Arena the host are on a two-game winning streak against this team.

Who will win the match between Coventry and Cardiff?

Cardiff are yet to win an away fixture this month. Also, they are on a five-game winless run. We can back the host to win this fixture. They have a decent winning record at home this season. They are unbeaten since October at Coventry Building Society Arena.

In four of the last five encounters between these two sides, less than 2.5 goals have been scored. We can expect the same trend to occur this time as well.

Out of the last five head-to-head matches, both teams have scored on only one occasion. It is unlikely that both teams will score. Cardiff could not find the back of the net when they played against QPR recently.

The first tip is that Viktor Gyokeres will score anytime – at 2.87 odd. He is on a three-game goal-scoring streak. He managed to score a goal against Sheffield as well. We can expect him to find the back of the net as the opponents are very close to the relegation zone.

Our second tip is that Coventry will win this game – at 2.05. At this ground the host are unbeaten in the last two years against this team.