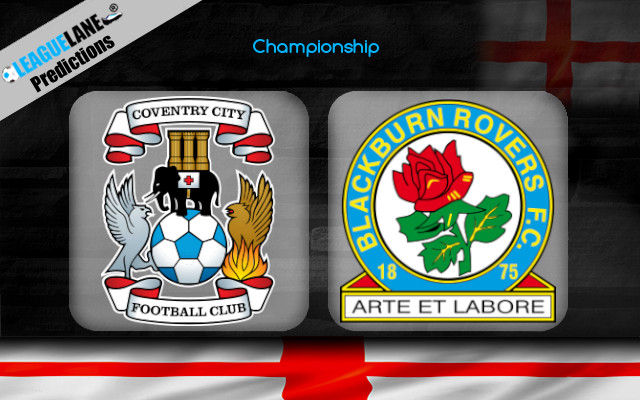 Coventry earned just two points in their last four outings and host Blackburn Rovers desperate to end the winless streak, now sitting just two points clear of the relegation zone. They’ve been very unpredictable and this mainly came for their inability to regularly score goals, seeing comfortable losses to Bournemouth (1-3) and Brentford (2-0) before holding Swansea to a 1-1 draw on Tuesday.

Sky Blues earned four of their five-point total at this ground, though, and will want to show off once again. They beat Queens Park Rangers (3-2) here on Matchday 2 and this proved to be their only win so far. Mark Robins will be desperate to make the best out of a busy schedule at St Andrew’s and we hope his men will be able to bounce – with visitors struggling just as much.

Indeed, Blackburn Rovers have seen two losses over the past seven days, where Nottingham (0-1) and Watford (3-1) snatched the points. They haven’t been scoring many goals either and this spells trouble in Birmingham. Still, records on the road will be more satisfying when it comes to the attacking department despite obvious struggles to retain any consistency – which ultimately promises excitement now.

The sides last met in August 2017 and Blackburn turned a thrilling League Cup clash their way (1-3).

Coventry bagged an FA Cup win over the rivals (3-2 on aggregate) beforehand, going back all the way to 2009.

We’ve last seen a league head-to-head clash back in 1999, when both were part of the Premier League.

We should now be in for another exciting contest and we’ll back Coventry to shock Rovers at St Andrew’s this time around. We have seen them struggling for consistency but they should be able to capitalize on the visitors’ shaky form, which was especially obvious at the back with shortcomings which saw them concede four in the last two outings.

Still, this should prove a very tough test and Coventry hardly have the same ambitions. With that in mind, we’re hoping to see goals and Sky Blues will have to outgun the rivals if they’re to pull it off. We’re thus also going for goals on both ends and backing a Yes on Both teams to score at 1.72, which has caught the eye of many too.