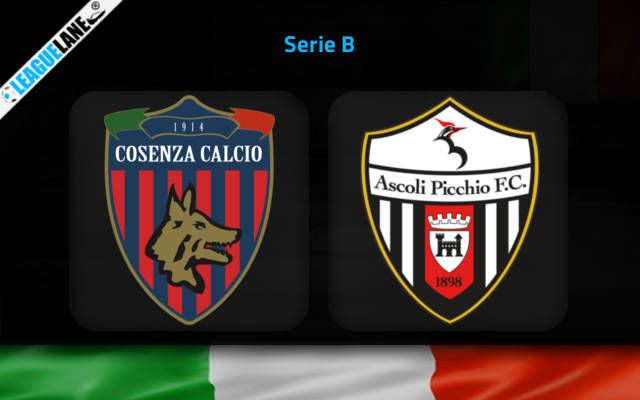 Cosenza vs Ascoli Predictions and Free Tips from our expert tipsters when the teams go head-to-head in Serie B on Sunday, 18 December 2022.

Cosenza have lost nearly 50% of their matches this season. They are just four points from reaching the foot of the table. They are not in a good form at home as they have only won once in the last two months.

On the other hand, Ascoli are tenth in the league. They managed to hold Genoa in a goalless draw recently.

Ascoli are on a two-game winning streak against this team. Both teams played against each other back in January this year and the visitors won that game by 3-1.

The visitors have a good record at Stadio San Vito as well. As they are unbeaten in three of the last four meetings.

In the last six encounters, the host have won only twice. Not to mention that they are winless in the last four outings.

Who will win the match between Cosenza and Ascoli?

We are backing Ascoli to take all three points from this game. They are the favourites to win as they have won last two consecutive head-to-head meetings.

The host have lost their winning form since October. They are very close to the relegation zone as well.

The last two consecutive matches have seen over 2.5 goals combined. This time we can back the same trend to continue.

The last two meetings at Stadio San Vito have ended with a total of three goals. Earlier this year both teams scored a combined total of four goals.

You can back the following, as our first tip is that Ascoli will win this game– at 2.62 odd. The visitors have won the last two consecutive head-to-head encounters against Cosenza.

Furthermore, our second tip is that Over 2.5 goals will be scored – at 2.40. In three of the last four overall head-to-head meetings between these two sides, at least three goals have been scored.