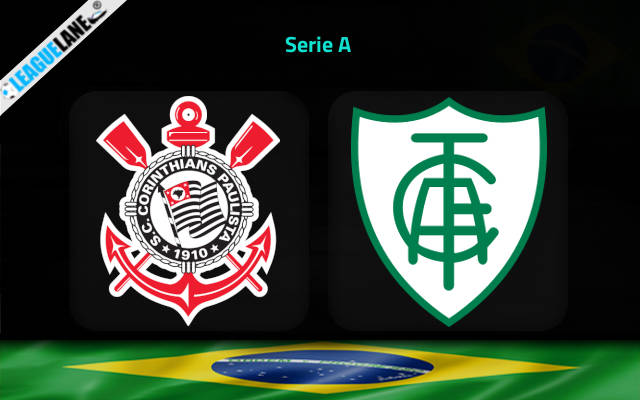 Round 8 of Brazil Serie A will kick-start this week as the table toppers Corinthians play host to the mid-side America Mineiro. These two sides will go h2h at Neo Quimica Arena this Sunday.

Corinthians are at top flight in Serie A with 14 points from 7 games. They won 4 times in the league while drew twice and lost on one other occasion. They have scored 11 goals in total but they have been conceding to often. The hosts are leading the Copa Libertadores promotion slot and also have a 2-point lead at the top.

Corinthians enter this game following a 1-1 Serie A drawn game against Sao Paulo. Under three goals per match were scored during 5 of the past 6 fixtures where they have taken part. Breaking down the goal distribution in that period, the hosts managed to score 7 from them.

On the other hand, America MG resides at the 9th position on the table with 10 points. Of the 7 matches played, they won and lost 3 times each while having drawn on one other fixture. The visitors have seen netting frequently but they tend to concede more of the same which hints that some defensive adjustments is needed.

America MG lost their previous game by 0-3 against Independiente del Valle in Copa Libertadores action. They also drew their last league fixture by 1-1 to Botafogo RJ. They have seen scored against in 5 of their last 6 games, seeing opposing sides hit 8 goals in all.

Corinthians remain unbeaten in their last 11 home matches across various competitions and they remain as a tough team to beat at home. They have not lost a single home game this season and have won 10 of their 11 previous home games.

Meanwhile, America MG are without an away win since their last 3 on-road fixtures. They lost 3 of their 4 away games played so far and has been struggling on travel this season.

By the looks of things, expect a victory for toppers Corinthians this Sunday.