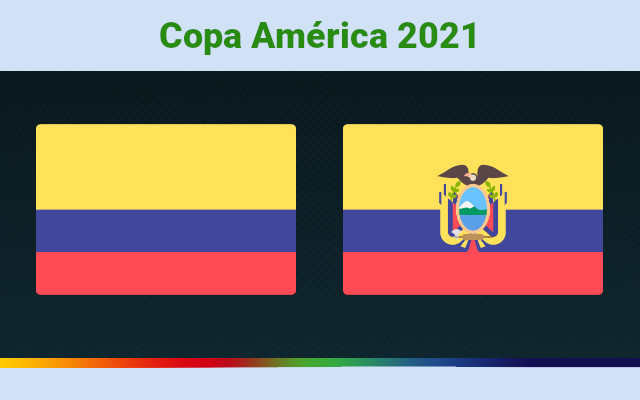 The battle for supremacy at Copa America continues with Colombia taking on Ecuador at the Arena Pantanal in Cuiaba. Both teams have been playing some entertaining attacking football lately and we are in for a potential thriller on Sunday night.

Colombia are making their 18th consecutive appearance at the Copa and have a good record in group phase and managed to book their ticket to knockouts in all except one of the last 12 campaigns. They reached the quarterfinals in the 2019 edition and were eliminated by Chile on penalties.

Ecuador on the other hand are in their 17th consecutive appearance at the competition, but they managed to get out of the group phase just three times. The Tricolor’s best ever run in the competition happened in 1993, when they reached as far as semifinals. It was Argentina who denied them a shot at the trophy, only to lose on penalties before losing the third place play-off to none other than Colombia.

The 2019 edition saw Ecuador finishing at the foot of the table without a win from three games.

Colombia had a difficult start to their World Cup qualification campaign and managed only 2 wins from the 6 played so far. They had some serious problems in defense and conceded a massive 13, with Ecuador handing them one of their heaviest defeats (1-6) in November 2020.

Yet, there are some positives in the attacking department and this is evident in the results earlier this month, a 3-0 win away at Peru and a brilliant comeback draw from 2-goals down against Argentina.

Ecuador started their campaign in October 2020, lost 0-1 to Argentina, then went on to pick three wins on the trot against the likes of Uruguay, Bolivia and Colombia, each match seeing a flurry of goals at either end. However, this red hot run came to an end in June with the 2-0 defeat to Brazil and the 1-2 to Peru.

Both teams are inconsistent and come with serious problems in keeping the ball away from the net, yet their attacking front looks extremely sharp and deadly.

It is too tough to call a winner in this contest, and all three outcomes have a high and equal chance.

Still, I expect goals at Pantanal Arena on Sunday evening. It will be worth noting that Ecuador saw over btts and 2.5 goals in five of their last six games across all competitions while Colombia saw over 3 or more goals in all previous six games.