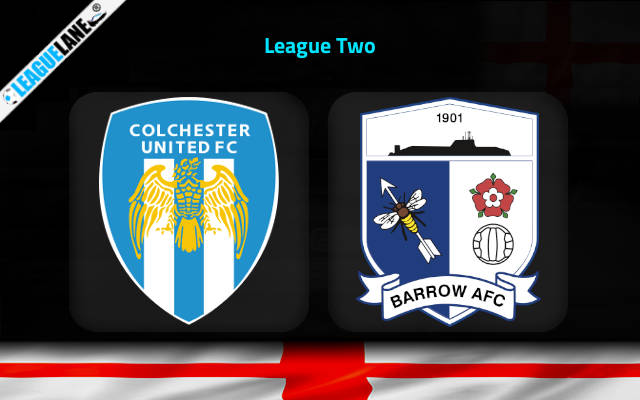 Colchester are winless in the league since November. They need to get a few points under their belts if they are to play in the EFL next season.

Barrow meanwhile is in no great form either. However, they are doing enough to stay above their opponents in their second season back up in League Two.

The U’s were last seen in a 2-0 defeat against league leaders Forest Green Rovers away from home. The result was their 4th consecutive loss.

With just a point coming from their previous five league fixtures, the club is 22nd in the league and three points clear of the relegation zone.

The Bluebirds’ most recent league game ended in a 1-2 defeat against Bradford City at home. This marked the club’s 3rd loss in five league fixtures.

Managing four points from those fixtures, the club is 20th in the league, a point clear of their opponents for Saturday. However, Colchester have a game in hand over them.

The club took Championship team Barnsley to the limit away from home in their FA Cup fixture last weekend in a nine goal thriller. They however, ended up on the losing side of things as the match ended in a 5-4 loss for the side after extra time.

The hosts have lost just once in their last four home games and have managed a couple of wins from those fixtures.

Their opponents on the other hand are on a 3-match losing streak in the league on the road and have failed to secure a win in their last six away fixtures.

Considering the above I have backed a win for the hosts.

Barrow have failed to score in their previous four matches away from home. Furthermore, with their opponents boasting one of the better defenses in the bottom half of League Two, a clean sheet is likely for the home club.