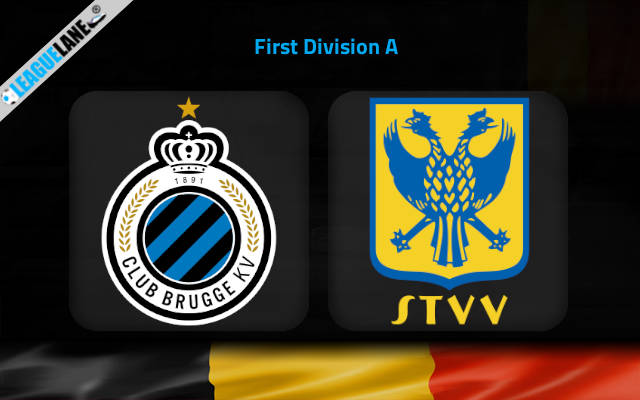 The current First Division A champions are at the second spot chasing the Royal Union SG and are in the zone for Championship Group. Differing by 16 points, Sint-Truiden has just won one of the last 5 fixtures after a string of back to back losses in the league. Since losing the Brugges derby on boxing day, the Blue-Blacks hopes nothing more than a win at Jan Breydel Stadion when the visitors arrive this Saturday.

Club Brugge KV is at the 2nd spot on the standing with 40 points from 21 games. From the 21 matches played, they won on 11 matches in the league while drawing on 7 and losing thrice other occasions. They have scored 41 in total while conceding a sum of 28 which shows their lethal attacking front.

The defending champions lost the latest league fixture against their derby rivals Cercle Brugge by 0-2. They then got involved in two club friendlies of which a draw happened against Karlsruher by 0-0 and a win against Puskas Academy by 1-0.

On the contrary, Sint-Truiden sits at the 13th position on the table with 24 points. Of the 21 matches played, they won on 7 games while drawing thrice and losing on 11 other occasions. Their total goals to conceding ratio stands at 22:31 so far in the league.

After losing 4 straight league games in a row, De Kanaries finally won the previous First Division A game against Eupen by 2-0. Sint-Truiden defense is far from perfect as they have been scored against in 5 of their last 6 games, giving opposing sides 10 goals in total.

De Kanaries are without an away win for the past 3 matches in the league while haven’t lost in the league to Sint-Truiden in their last 12 games. Also considering the hosts’last 11 undefeated home games, we predict Club Brugge to win this Saturday with over 2.5 goals.